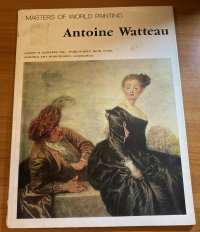 At any rate, watteau to say about this artist. A late seventeenth and early eighteenth century French artist–Voltaire might have thought him old school. You know, if I read and remember enough of these monographs I will see he’s more Gainsborough than Caravaggio. The brief text introduction in the book explains how he was misunderestimated in his age, but how he’s really a towering figure. Except fewer people remember his name than Caravaggio, probably.

Not bad to look at; group scenes where you can tell the subjects are people. I don’t know that I would hang any reprints of his work in my home if I were to come upon one somewhere. But I probably wouldn’t, as, c’mon, it’s Watteau.

The book, though, is nominally a Harry N. Abrams book, but it’s also credited to Aurora Art Publishers, Leningrad. Most of the pieces depcited on the plates were in Soviet museums, and this was a nice, artificialish “We like art, too” reach across the Iron Curtain where the book was published in the Soviet Union, but the art images are all pasted in by work-from-home people circa 1979. I have mentioned before that I dated a girl in the 1990s who caught on with one of these publishers who would send her books and art plates to paste into them, and the girl would get dinged on quality control if the plates were a little crooked, so it wasn’t something you could do while watching television (as the ads in the magazines promised).

You know what? I have forgotten Watteau since I started typing this review. Which explains why it’s the only monograph left at ABC Books besides the $30 “comic” art one (which I will probably buy in 2022). So, consider that the ultimate meh.