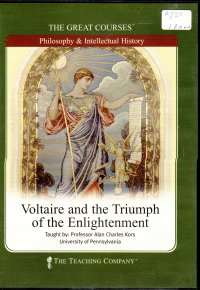 I took a break in the Charlton Heston-narrated cassettes on philosophers to listen to this Teaching Company/Great Courses series on French author Voltaire. Although I had read Candide–my beautiful wife and I took turns reading aloud from it during our courtship–I was not that familiar with him. This course certainly set me a-right. Apparently, he was the biggest European author/thinker of the 18th century, although it might be a touch exaggerated since it is a course on Voltaire, and the course slant tends to be a little homer if you know what I mean.

It definitely gives a pretty good survey of his writing, his life, and his times. The strongest parts are, again, the biographical stretches and the specific works in the beginning. When we get to the broad summary Voltaire and lectures on the back half, it moves away from citing individual works and more exploring themes with little support in the actual texts.

But, still, I already knew my Voltaire from my Voltron, and should I fall into any trivia nights in the near future (unlikely), I will surely remember that he wrote a long poem on the Lisbon earthquake and that he wrote the Dictionnaire Philosophique. However, as time goes by, I will likely confuse that with Bierce’s The Devil’s Dictionary. Except one is titled in French, although the obvious might not help me. Fortunately, the deadliest plague ever!!!1 has curtailed trivia nights. That, and in approximately eighteen minutes, I will misremember Voltaire’s birth name as Martin L’Aday and subsequently “remember” that Voltaire is French for meatloaf, which will be disputed the next time my beautiful and French-speaking wife serves her beloved meat casserole.

Also, when I was at Hooked on Books a week and a half ago, I mentioned looking for some Leibniz. Because this course says Voltaire started out really digging the philosophical optimism by argument Leibniz offered and then turned against it after the Lisbon earthquake and the death of Voltaire’s mortal beloved. So I’m interested in acquiring some Leibniz. Not necessarily reading it–heaven knows I have many, many fine primary texts that I’m saving for retirement–but to have just in case. As I’m going to ABC Books this morning, perhaps I will luck out.