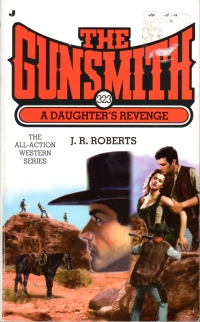 If you have ever said to yourself, "Man, this Zane Grey western is okay, but it really needs some explicit sex scenes in a number of variations!", this book is for you.

This book is the 323 book in the Gunsmith series of westerns, and the first of the twenty-first century men’s adventure novels I’ve read and the first Western men’s adventure novel. I’m not sure which explains the fact that there are more male appendages waved about than pistols. This book is copyright to Robert J. Randisi, and I presume that means he wrote it under the pseudonym. I previously reviewed Randisi’s Blood on the Arch, and I didn’t care for that book, either.

This book is a Western, set in Denver, and aside from a bit of horseback riding in the beginning, there’s no real sense it’s a Western. Someone’s taking potshots at The Gunsmith, the titular hero. This person keeps missing him, and he’s not sure what the message is. When he gets to Denver, he meets the daughter of a man whose death was laid at The Gunsmith’s hands many years ago, and the woman explains that her crack-shot sister is hunting for him. The woman ends up dead, and her death is also laid at the hands of the Gunsmith by the unsavory characters that are trying to do the Gunsmith in and are using the crack-shot daughter as a cat’s paw.

As I said, it could be a modern detective novel except for the occasional mention of horses. People are always getting into and out of cabs, for crying out loud. That’s no Western.

Yeek. I bought four in this series in Clever last month, and the remaining three are on the collapsed shelf. Perhaps I’ll move them.

When I’m in the mood for another western, perhaps I’ll try the Longarm series, some of which I’ve picked up at Friends of the Christian County Library sales over the years. But I’m almost afraid Longarm is a euphemism now.