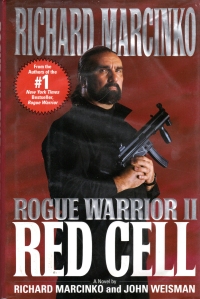 I picked up this book after reading A Daughter’s Revenge as a palate cleanser. I’d tried to read it soon after I read Rogue Warrior, but I stalled out. This time, however, it was just what I needed.

This book is a fictional account wherein Marcinko–as a fictional character–uncovers a set of smuggled nuclear weapons parts at an airport in Japan. He uncovers connections with a former Secretary of Defense who might be smuggling banned technology to the North Koreans. The former SecDef says he was investigating the matter himself, and Marcinko is called back to active service to look into the matter. He gets to put a team of SEALs together as Red Cell to test some bases and to look for those who would help the North Korean nuclear program.

The first person narrator voice of the book is coarse and vulgar, full of bravado and bombast. If you don’t mind that sort of thing, it’s an enjoyable read. Unfortunately, some of that takes away from the suspense of the actions, as it seems like they’re just playing video games until they’re ambushed and take some casualties, at which point you realize how little characterization the other people get–they’re only extensions of the narrator. This is consistent, though, with the voice, so I don’t know how hard to knock the book for it.

But I liked it, which is good, as I have others in the series.

As it is an early 1990s book (like The Day After Tomorrow and War in 2020), it takes place in a world I remember, but a world that is different from the one we live in now. The concerns then aren’t the same as the thriller concerns now, so worrying about the North Koreans getting nuclear weapons seems a little like chasing cattle who’ve escaped the barn. Or goats. I hear goats are worse.

But reading these books makes me feel like a reader in the 1950s and 1960s snapping up Alistair MacLean’s World War II thrillers. They were thrillers, sure, but they were safe thrillers set in a world where we know the good guys won. Of course, I read those same MacLean thrillers in the 1980s and 1990s. But I digress.

At any rate, I enjoyed this book and look forward to reading the next.