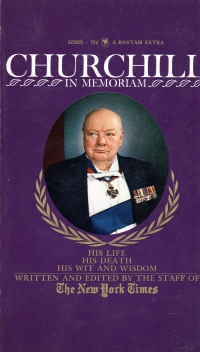 The New York Times threw together this book after Churchill’s death. It rounds up reactions to his death, statements from other world figures, and includes a brief biography of his life.

I’ve got quite a stack of Churchillenalia, including some of his books, some bios, and letters he exchanged with his wife. So this little paperback might be a gateway into those books. It’s a bit stiff of a read, but it’s respectful. I wonder if the newspaper would be capable of this sort of thing now, but I doubt twenty-first century purchasers of death-commemorative books want prose. Probably just pictures.

But it was worth reading for the summary of his life if nothing else.