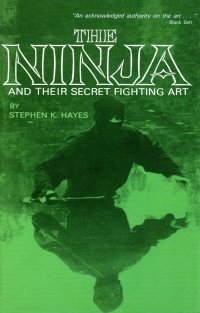 I bought this book at ABC Books in July, so it was at the top of the stack. I’ve read a couple other martial arts books in the last year (The Martial Artist’s Way, The Zen Way to Martial Arts, Taekwondo Kyorugi, and so on).

The book starts with a bit of history of the ninja in Japan and then tells how the author went to Japan to study with Masaaki Hatsumi, the last ninja grand master (still alive at 87 today). The book then talks about some fighting techniques, describes some weapons of the ninja, and the has a couple of chapters on reconnaissance, espionage, and the spiritual elements of budo. It’s not a long book–150 pages or so–and it has a pseudo-libary binding but no library marks, which makes me think it might be a book aimed at younger audiences.

It’s not so much a how-to book on strikes and whatnot as a summary course. Which is unfortunate. I’m really looking for dirty tricks to pull on the other students at the martial arts school where I train and not so much high-level musing on how to manipulate people using the earth/water/fire/air/void breakdown of the universe.

Full disclosure: I studied at a bujinkan dojo briefly in the middle 1990s, so I would have been indirectly a student of Hatsumi Sensei myself. But not this book’s author.