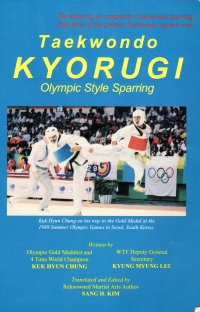 I don’t really consider myself a martial artist, even though I have studied at a Satori martial arts school for five years and have considered trying out another martial art style “for fun.” I mean, some of the people who study with me are at the school three or four days a week, take teaching positions, and are really into it. I just show up from time to time and punch things.

The Satori school is based on tae kwon do (with additional focus on boxing and some elements from other martial arts styles like muy thai and hapkido), so I bought this book last month as part of my program of helping to reduce the difficulty of ABC Books’ annual inventory. As part of my “Man, The Count of Monte Cristo Is Long And Boring” program, I picked this book up pretty quickly as I expected it would be a pretty quick browse.

The book focuses on competitive tae kwon do sparring according to World Taekwondo Foundation rules, which I expect the Olympics uses as the book is written by an Olympian and has “Olympic” right in the subtitle. The book shows the strikes in tae kwon do, which is kick-focused, but it only identifies the strikes and does not give step-by-step directions that other guidebooks like the ones I checked out when I was a small, picked-upon kid in the 1980s, do.

It outlines a training program for the competitive sparrer, including basically bulleted lists of techniques and combinations to pracice, stretches and exercises to work on, and that sort of thing. The book talks a bit about strategy in sparring and includes the official procedures and rules for WTF (World Taekwondo Foundation, remember) tournaments, particularly international competitions.

It gave me a couple of ideas for combinations to try and the urge to work harder at home on my exercise, stretching, and practice. So it was certainly worth my time. And it makes it harder to deny some bit of being a martial artist in me if I insist upon reading books on martial arts (I’m not sure if Hagakure counts).