It’s no secret to our neighbors, but we burn Duraflame logs at Nogglestead. 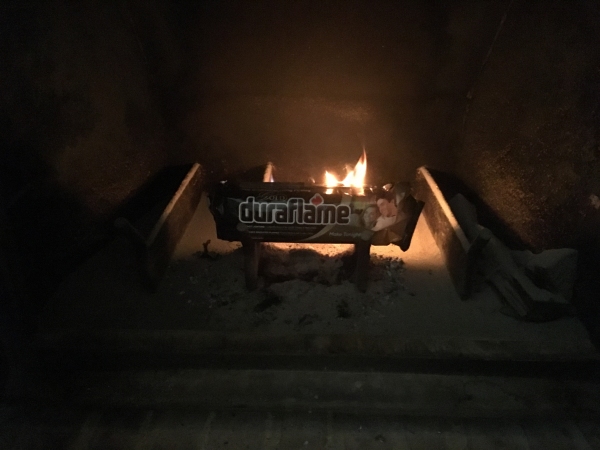 Of course, if you’re a long-time reader, you might have expected as much. Of course, the Duraflame log depicted in that post from 2011 gathered dust in the fire box for seven years before I lit a fire at the end of November, 2017. And once I got the fire lit, I kept it going, lighting something almost every night throughout the winter last year.

I didn’t lay in a supply of firewood this year as I couldn’t find anyone in my circle who knew someone selling it, and I didn’t want to go onto an Internet forum (Facebook marketplace or Craigslist, you damn kids call them) to have some random fellow deliver me a load of…. something (low trust society, donchaknow). I did read in the news that firewood sales are becoming scarce around here as land in the near-populated areas are getting cleared for development (and the trees piled into the middle of the lot and burned because that’s cheap and convenient).

So I’ve gone with Duraflame logs because they light easily, for the most part, and they last three or four hours (a little less if you light one when the remnants of the previous one is still hot). I mean, it’s more expensive than the wood would be at eighty dollars a cord, but they’re three dollars each when you buy a pack of nine at the warehouse club.

So I felt like a fop for about a year about it. It’s an expensive(ish) fire affectation, and the neighbors all know it because the scent of a wax log differs from that of real wood (also, it doesn’t crack or snap; it just makes a little bit of a hiss as it burns).

But, you know what? I’m not ashamed (too much) any more.

It’s not because I suddenly have embraced a 21st century-style identity of Person With A Trait Not Widely Accepted And Probably Needs To Be Corrected Who Suddenly Advocates, Nay Demands Everyone Else Adore It (the celebrated PWATNWAAPNBCWSANDEEAI lifestyle).

Mostly because I realized a Duraflame log is still more work than a gas fireplace, and the lack of effort bothered me. Also, I have insufficient know-how in all phases of firecraft, from selecting and stacking wood to lighting a nice fire easily every time, so I felt like a lesser Man for using Duraflame logs.

But it’s not like you just flip a switch or use a remote and there’s fire. It does include some work. I have to empty the ashes weekly and clean the gristle off of the glass in the doors. And I do have to stick the fire log (or firelog, as the package indicates) and light it.

Although, to be honest, I think that the clean-up work I accept for this facsimile of a log fire might mark me further as a sucker.

I am sorry I brought it up now.