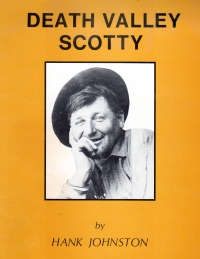 This book has all the hallmarks of a tourist pickup book: It’s thin but it’s large, which makes it a good size for pictures, and it has a narrow scope.

This particular book tells the story of man born in the 1870s in Kentucky who goes west when he comes of age, does a little prospecting in Death Valley, but really makes a name and a spectacle of himself when he gets people with a little money back east to give him cash for partnership in a mine that doesn’t exist. He then goes back to California and spends the money profligately, claiming he’s spending his wealth from the gold mine. He gets someone to stake him the money to rent a train from California to Chicago to set the time record for it, claiming that he has rented the train on a whim, and when the train does set the record, he lives off of the celebrity for a while before returning to California.

The book, and the tourist site it promotes, comes from a wealthy Chicago man who starts out as one of Scotty’s marks but comes to realize what Scotty is. The wealthy man continues to fund Scotty for his own amusement and travels to Death Valley to hike and ride with the colorful Death Valley Scotty. The wealthy patron starts to build a place to store his equipment when he travels back to Chicago, and starts to build a home for Scotty, but it morphs into a large undertaking not unlike Hearst Castle. Although The Castle or Scotty’s Castle (which Scotty, of course, told everyone he was building, while the patron played the part of his Chicago banker) was not completed before the Depression stripped the patron of his fun-in-Death-Valley money evaporated, it did grow into a tourist attraction.

An interesting story about a colorful, small-time con man who got into headlines. Too little to be found on a trivia night, but a nice quick read nevertheless.