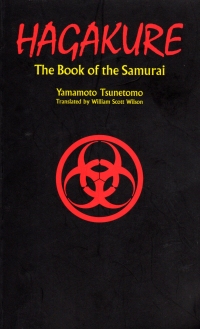 Well, this book has answered the question, “Would I have wanted to be a samurai?” No.

The book reads a little more like the Analects of Confucius than Buddhism. One of the main thrusts is not so much that obedience is the cornerstone of an orderly society from the peasant to the emperor, and that obedience includes being a good man taking care of his charges. Instead, The master is all. The retainers must live and die at their master’s will, and they (the samurai) must think and live only to die well in the service of their master.

Well, you can see why I, as a twentieth century American (trapped now in the twenty-first century) would chafe at this sort of worldview and instruction.

The book is chock full of examples of good service, like this one:

In the generation of Lord Katsushige there were retainers who, regardless of high or low rank, were requested to work before the master from time to time when they were young. When Shiba Kizaemon was doing such service, once the master was clipping his nails and said, “Throw these away.” Kizaemon held them in his hand but did not stand up, and the master said, “What’s the matter?” Kizaemon said, “There’s one missing.” The master said, “Here it is,” and handed over the one he had hidden.

So you’ve got a lot of stories of good retainers and bad retainers designed to illustrate the code of conduct for samurai, but basically the moral code comes down to It’s Good if the Master Doesn’t Kill You For It, which is sometimes lopping off someone’s head and sometimes not lopping off someone’s head in similar circumstances. You’ve got some tips makeup tips (always carry some rouge in your sleeve for those times when you’re hung over and need to improve your complexion), tips on homosexual relationships among the samurai (the younger man should make the older man wait five years to prove he’s not fickle), tips on etiquette (never be seen sneezing or yawning), tips for removing faces, and admonishments that samurai should not be Buddhists.

There are some quotable bits that make sense, and I did learn some things about feudal Japan that I did not know, especially about seppuku which is discussed heavily throughout the book. I learned the word for committing seppuku when one’s master dies (tsuifuku), and I learned that often the one performing seppuku had a second of sorts whose job was to decapitate the seppukee after the seppukee opened his bowels. And that many samurai didn’t want the job because it was shameful to perform it poorly. And that some controversy existed as to whether it was better to completely sever the head or to leave a little flap of skin so that the completely removed head would not bounce around undecorously.

So I learned some things, but not useful things, and certainly things one can drop into conversation with normal people.

Still, I’m glad to have read it to get a better sense of what samurai thought of themselves. The author was a samurai who did not commit tsuifuku when his master died because his master wanted him to live. He eventually became a Buddhist monk as he wrote this bit of historical reflection. Many times as he’s telling the stories, he says that the kids these days are softer and weaker than the samurai in the good old days.

Apparently, the book is an excerpt from the original(s), but I don’t think I need to learn Japanese to read the rest.

Worth a read if you’re into this sort of thing, but it is not a self-help book by any means.