On Sunday night, I placed another order from ABC Books. I have assigned my children to read The Autobiography of Benjamin Franklin and Narrative of the Life of Frederick Douglass as part of their home school adventure before it became a home school and a little tele-school adventure. I ordered a copy of each off of Amazon, but one of them is reading is assignment faster than the other, so it opened an opportunity for me to place another order from ABC Books. Which arrived on Thursday.

As I might have mentioned, I cannot browse their stacks, but I do the next best thing: I go through their inventory by category and end up placing a bunch of orders based on whether the title looks interesting. For the most part, I don’t even click through to the book description; I just click Add to Cart on the listing page because I’m being, erm, promiscuous (definition 2) in purchasing. More than normal, and with less discernment than when I am physically browsing the shelves (and less blushing). But now that I’ve laid the groundwork for my defense, here’s what I got: 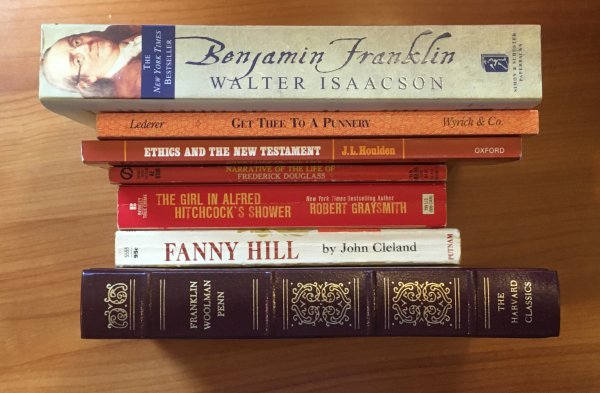 So I was going to quip that if the coronacation lasts too long, I will eventually have bought the entire inventory of ABC Books without buying the whole shop. To be honest, that might be the best-case scenario as I’m not sure I’ll ever be able to return in person.