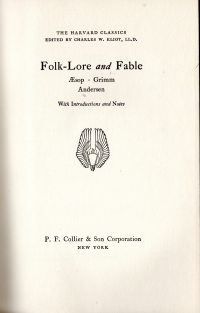 I’ve been reading this book to my son(s) over the course of the last two or three years. It’s a 368 page book, so cut me a little slack. Also note that we did the book in fits and starts, where we read a bunch of Aesop together, both boys and I, at the outset, but once we got into the relatively bloody Grimm brothers, we held off a bit. Eventually, the older boy wanted to hear the stories more than his younger brother did.

At any rate, we’re through it now. I’m not going to go into great detail because it’s been three years, and I’ve forgotten any of the lessons of Aesop’s that I might have learned. I will sum up some thoughts on each:

All in all, a good collection. Now we’re going to read the Harvard Classics Arabian Nights, and three years’ hence when we finish that, the lad(s) should be ready for Plato and Aristotle.

1 thought on “Book Report: The Harvard Classics: Folk-Lore and Fable by Aesop, the Brothers Grimm, and Hans Christian Andersen”