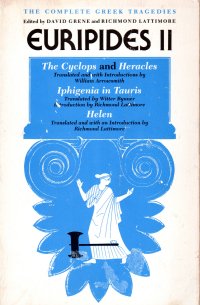 After watching Hercules Unchained, I decided to go right to the source material. Well, Hercules Unchained is based Sophocles and Aeschylus’ works, not Euripides. Which becomes clear when one reads the tragedy Heracles that is included.

You know, the contemporary wailing about Hollywood relying heavily on known intellectual properties for entertainment, but it has nothing on the ancient Greeks.

Euripedes put his own spin on the latter two tales, wherein both women were not where common (Homeric) stories had them. Artemis replaces Iphegenia with a hind during the moment of sacrifice, so Iphegenia is still alive after the Illiad. The gods make a double for Helen who is carried to Troy, so the real Helen has remained true to her husband. Given that the book is titled Euripedes II: Four Tragedies, I expected the stage to be littered with corpses at the end of these plays, but I was pleased that they ended a little more happily than that.

Each play has a relatively length bit of criticism/history/relating the stories to other Greek works that I skipped. A lot of times, I’ll come back and read the commentary after I read the source material, but this time I skipped most of it (I read the intro to Helen which is presented after the play and I read a little of the introduction to The Cyclops). I’m more interested in the source materials than the academic scholarship around it anyway.

At any rate, I flagged a couple of things:

If you’re interested, you don’t have to buy the book; you can find all of these plays and more on MIT’s Classic page for Euripedes. You might like that, gentle reader, but as you know, I need a book. This book is part of a series, but I am not going to seek them out. But if I see them at ABC Books or the Friends of the Springfield-Greene County Library, I will be all on them.

Because these pieces of classical literature, in good translations, are very approachable and readable especially if you skip the academic and mostly irrelevant prose bookending them.