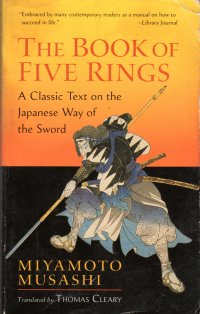 This book actually includes two works. The title work and A Hereditary Book on the Art of War by Yagyū Munenori circa 1632. Each work runs under a hundred pages, so just having one would be a very thin book indeed.

The title work lays out the basics for Musashi’s martial arts school. He became a prominent sword fighter, clearly having defeated all his enemies until he retired from the sword-fighting life and founded a school. The five rings in the title are Earth, Water, Fire, Wind, and No Scroll. In Earth Scroll, he discusses the science of martial arts; in the Water Scroll, he discusses his own school and its practices; in the Fire Scroll he talks about battle–whether it’s one-on-one or a battle between armies, the principles are the same; in the Wind Scroll, he discusses the other schools and why they fall short; and in Emptiness Scroll, he talks about embracing the teachings so much that one leaves the teachings behind, which is a very Buddhist thought, but it’s blended a bit with Taoism.

His martial art is swordfighting, so everything is geared to that end–not empty hand stuff, although that is mentioned briefly. Mushashi favors fighting with two swords, a katana in the dominant hand and a short sword in the off-hand, but the book does not really go into drills for it–for that, you would have to join the school, of course. He also says a couple of things that go counter to what my school teaches–he mentions putting the weight on your heels (which I do too often anyway–I shall have to attribute this to the teachings of Mushashi instead of bad habits if called out on it) and not making a sound when striking (which I don’t do, either, I don’t picture myself as a “Hai-ya!” kind of man).

Also, the book is deadly serious. Everything you do should be focused on killing your opponent. I picture the school as something like the bad guys’ training programs in kung fu films: make a mistake, and the headmaster kills you.

After many of the lessons, such as they are, he tells you to dwell upon what you have learned. So even this translation from seventeenth century Japanese seems to be, like the other martial arts books with pictures that I read, something for existing students to take away and use for review.

The second piece, A Hereditary Book on the Art of War only a bit dwells on the work from Sun Tzu. Instead, it’s a bit of a mishmash of Confucianism, Taoism, Buddhism, and lessons from Musashi (although this work was written earlier). So it talks about swordplay, but it also talks about emptying the mind, following The Way, and obeying authority–the author himself was high in one of the Shogunates, so of course he would blend in some Confucian thought.

At any rate, it does not hold together as well as The Book of the Five Rings as it kind of wanders and is chock full of stuff like this:

Voidness is the eye of Buddhism. There is a distinction between false voidness and real voidness. False voidness is a simile for nothingness. Real voidness is genuine emptiness, which is the emptiness of the mind. Although the mind is like empty space insofars as it is formless, the one mind is the master of the body, s the performance of all actions is in the mind.

So a lot more, erm, philosophical than practical.

I don’t know that I learned a whole lot practiceable from this book–I mean, most of my actions already were directed to crushing my enemies, driving them before me, and hearing the lamentations of their women, so that’s not a new thing. But if I’m going to slowly get into Nipponophilia (one book in 2018, Hagakure: The Book of the Samurai, and one book in 2020, Samurai Warriors, is definitely a slow burn indeed, although I can spell samurai right the first time consistently now), I need to read the seminal texts.

Also, this book counts as the Translated category in the Winter 2021 Reading Challenge. And, having read the source, perhaps I can complete The Martial Artist’s Book of the Five Rings which I started reading at stoplights on the way home from ABC Books in October 2018 but did not finish. I read Stephen Kaufman’s Zen and the Art of Stickfighting last December, which probably brought these books to the top of my mind recently. That and the need to read something translated for the reading challenge.

So, in summation, a good book if you are into Japanese history, the history of martial arts, or eastern thought (especially the blending of philosophical/religious traditions). Not a hard read, not a long read (166 pages which includes end notes for each work and a bibilography for further reading). But, although the cover says “Embraced by many contemporary readers as a manual on how to succeed in life.” —Library Journal, that’s overstating it by quite a margin. A couple pages on footwork on different terrain requires a lot of analogous thought to apply those lessons to everyday life. Maybe the emphasis on strike-and-return–don’t spend time inspecting where you’ve struck, don’t leave your sword (or striking appendage) extended after the strike itself, and don’t watch and admire your home runs–run the bases like it’s a bloop single-maybe-a-double. But most of the lessons are either geared to swords or teaching swords or so nebulous that they’re not discrete lessons at all.