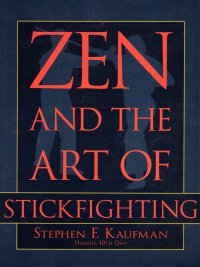 I bought this book at ABC Books in June of 2019, in the Before Times (sudden thought: this might still be the Before Times of something; I’d better get to enjoying them more). As I mentioned then, my martial arts school has been working with escrima sticks for a while, so I thought I might learn something from this book.

Well, I picked it up this weekend and paged through it pretty quickly because it is chock full of pictures.

So, what did I learn from the book?

Well, not a lot of really new materialy. The sticks used in the pictures and this sensei’s training are a little longer than the ones we use in our class. But he described some of the strikes in terms of overhead strikes, forward strikes, reverse strikes, and terms we don’t use in our school–when I turned them into 1, 2, 3, 4, 5, 6, and 7, I got a little more out of it. Because the stick is longer, the book shows two-handed strikes and a lot of rear strikes with the butt of the stick that my kyoshi does not emphasize. The book has a lot of multiple-attacker scenarios that we haven’t covered in my school, but sometimes I looked at them and thought, “Why would you do it that way? You’re turning this way and then reverse the motion to do this instead of following through and doing this….” Of course, some of the training is designed to break down tendencies and habits to add new possibilities to your repertoire. So I can’t discount it as I cannot discount what my kyoshi does at our school. He has really shaken things up after I got my second degree black belt, which made me glad I got it when I did.

However, I am not sure I would ever want to swing the stick up and over my own shoulders and head to attack someone behind me. In part of a second strike on a separate attacker, I would prefer to spin out and strike from a forward position as this would move me out of a position where one attacker is ahead of me and the other is behind me. But, again, I suppose it is important to drill things you probably wouldn’t use so you know how to do them if you have to.

Also, the starting stick position in the book is the stick held down by the legs, which I guess is a good practice starting position for carrying a walking stick or an umbrella, but I would definitely worry about speed in bringing that up for defense. An improvised weapon, though, would probably go to our ready-start position, which is up over the shoulder. Also, the book talks about using the stick as a block against kicks and punches, which seems a little iffy to me–it’s placing the strength of your wrist against the body weight of an attacker, and I don’t think my wrist and stick would completely stop an overhand right from someone my size–or smaller, even. But, like I said, perhaps it’s best to practice things you will never use in case you ever do.

You know, in addition to browsing martial arts books since I’ve been taking martial arts, I also checked them out from the library when I was a scrawny kid and wanted to learn karate so I could show those other kids. Unfortunately, I never did learn the martial arts from the books because you really can’t from a start and end photograph. You can learn how to use a weight-lifting machine from the iconography on the machine because the machine really inhibits motion to the proper point A to point B (Dom Mazetti notwithstanding). The human body is not like that, though, so one can swing a stick in many ways. How far outside the body line should the stick go from up to down? How much arc on the whack? Oh, yeah, do not drag like you’re cutting with a sword–swing to the point of contact and back.

So a book on martial arts is a good reminder or perhaps good inspiration if you already have experience with martial arts and know how some of the moves should work before looking at the pictures. But you’re not really likely to become good at stick fighting just from this book. You need the reps. So do I. We’ve got a new kata that started last cycle, and I only kind of remember the first three positions/moves. So I should get to class more often, you’re saying; indeed, I should.

Also, I noted in the book that the author cites one of his previous volumes: The Martial Artist’s Guide to The Five Rings, which I bought and started to read in October 2018. I don’t think I finished it; I wonder where it has gone (one of the book accumulation points, no doubt).

So I shall probably have to pick that one up again when I find it.