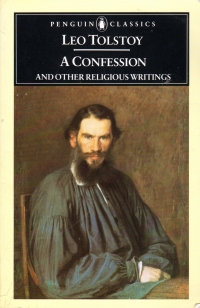 For starters, the lead piece, “A Confession”, is biographical in nature, and one even in this 21st century can relate. Tolstoy, a literary lion, comes to question his relationship to the eternal, especially that presented by the Russian Orthodox church. He runs through the stages of exploration, inquiry, grappling with reason, and ultimately finds peace with the simple, unlearned Christianity of the peasants. His essay “What Is Religion And Of What Does It Consist?” explores what religion is and what it means and draws some parallels between different religions to show what’s common to them and what man is looking for from them. In “Religion and Morality”, he talks about whether morality can be separate from religion. In the final bit, “The Law of Love and the Law of Violence”, he discusses true Christian love as the basis for society compared to all other force-based systems that have dominated the world to this point.

The writings are engaging and easily comprehensible, although at times a little repetitive, and they apply as much today as they did when they were written a hundred years ago. The last piece seems extraordinarily timely: Written between Russian revolutions, it points out that some of the angry people seeking to overthrow the tsar will only impose their own vision with the same force that they fought against. At times, he sounds a little sympathetic to socialists and communists, but he won’t know what they end up doing. Also, the whole of the Christian nation thing, turning the other cheek on a national scale, might be true to the heart of the gospel, but as national policy, it’s a good way to get your nation and religion overrun by those who follow thunder gods. Instead, Tolstoy thinks without the state, men will fall to small groups in harmony. An anarchist, or a small commune-ist. I disagreed with his prescriptions and predictions, as his belief in Christians born-again with the gospel would trump the fallen state of human nature.

A side note: It’s pretty clear in “A Confession” where Tolstoy wrote The Death of Ivan Ilyich. He almost alludes to it by name. Maybe he does. At any rate, it made me feel smart to connect the two having read both.

Worth a purview for the title piece alone; the others are just gravy.

2 thoughts on “Book Report: A Confession and Other Religious Writings by Leo Tolstoy (1987)”