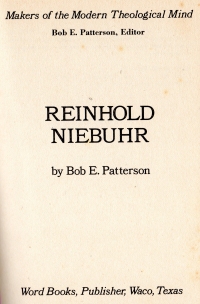 This book is the first in a series, Makers of the Modern Theological Mind, and it’s a summary view of Reinhold Niebuhr’s work and through for forty or fifty years in the middle of the 20th century. I don’t know where I bought the book, but I know why I picked it up: I’ve been seeing Niebuhr’s name in First Things magazine and some other things I’ve been reading, and I remember from my collegiate studies that he and his brother were considered important thinkers in the middle of the 20th century. So I gave it a go.

The book is a thematic study of Niebuhr’s thought. That is, it is grouped by them, not chronologically. It’s broken into chapters on Sin, Grace, and Love and Justice along with a chapter on his biography and some groundwork for his thought. It’s not a long book, 162 pages with citations and bibliography, so it’s something you can read relatively quickly and feel a little confident you know a bit about where he’s coming from.

Niebuhr’s concept of sin is heavily informed by the Existentialists of the era (and Kierkegaard, which precedes the era). The nature of man is that he is physical, material, and natural and he is self-transcendent and can recognize where he falls short of the ideal (which is Christ). This contradiction leads to the original sin and the knowledge of God. Man has free will, but he will always ultimately fall short and will know it. So I really understood this bit.

In the concept of grace, to make a short summary of Niebuhr’s though shorter, Niebuhr thought the crucifixion provided initial, justifying grace to man and the grace (or Holy Spirit) acting through a justified person was sanctifying. Niebuhr is trying to balance here between faith and works in other words.

Where I really dispute Niebuhr is his concept of Love and Justice. Justice flows from love, and eventually he gets to political institutions as countervailing blocs fighting for their rights. But in his ideal, the people in the blocs are sanctified and justified by grace, so they’re doing the right thing. Which is not where we’ve ended up. As the book is sectioned thematically and not chronologically, as I mentioned, it’s not one hundred percent clear from the text of this book whether Niebuhr evolved to or evolved from this position.

One thing the book does make clear is that Niebuhr’s thought evolved over the decades that he taught and wrote, so sometimes some of his work tighens, refines, or seems to contradict his earlier positions.

So I enjoyed the book, and I’m going to keep my eye out for some of Niebuhr’s primary works.