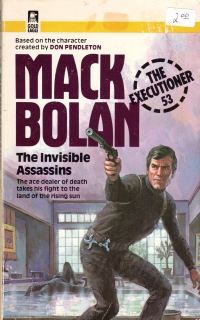 There’s generally a tip-off that an Executioner book is going to be sub-par for the series: Mack Bolan lights a cigarette. Bolan doesn’t generally smoke throughout the Pendleton books and into the New War period; if one of the house authors has him lighting a cigarette (see also Return to Vietnam), you can assume the author has no familiarity with the series outside the outline handed to him. Mack Bolan lights a cigarette in this book. So the character does uncharacteristic things.

These books really jump into the 1980s action pop culture zeitgeist; we have Harriers and Uzis in previous books and ninjas in this book. In it, Bolan is called in to watch over a computer expert who is then killed right before Bolan’s eyes. He starts to investigate, and wouldn’t you know it, the trail leads to Japan, ninjas, a wealthy man who fancies himself a samurai warlord, and a plot for World War II-era vengeance via biological warfare. Which Bolan disrupts of course.

But the character is out-of-character in torturing and then killing someone offhandedly. The book also lacks the reflective self-consciousness present in other books and focuses on the gore and two-fistedness, so it’s a lesser entry in the series that might have been better in the Nick Carter or Death Merchant series.

A couple of moments of unintended levity: In one scene, Bolan is talking to the head of a martial arts school that teaches an advanced Ninja class which he says is not for beginners, and the sensei gets a phone call during his conversation with Bolan. The guy on the phone wants to know if he can take the ninja class, and he’s got two years of Tae Kwon Do experience. So the sensei agrees he’s ready for the Ninja class. Gentle reader, I can assure you that two years of Tae Kwon Do does not make you ready to be a ninja. At best, it makes you ready for a third year of Tae Kwon Do.

And ahead of the climax, Bolan picks up a gun and a sword and enters a corridor where he see the Ninja at the end. Instead of, I dunno, shooting or stabbing the ninja, he goes hand-to-hand. How cinematic it would have been were it filmed. On the page, though, it was underwhelming as was the climactic sword fight while in hazmat suits in the biochemical lab.

1 thought on “Book Report: The Invisible Assassins by “Don Pendleton” (1983)”