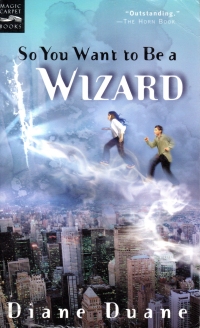 A month ago, I mentioned Diane Duane, so when I soon thereafter came across this book on my to-read shelves, I picked it up.

Now, I’ve never read the Harry Potter books because I tell people I don’t read young adult books or something. Nobody’s asked me in some time, come to think of it. Harry Potter is so 20th century. But I invented a loophole for this young adult fantasy book: See, it’s from 1983, so the twelve year olds within are my age or a little older. Or something.

At any rate, in the book, a New York girl who is bullied hides in the library to escape her tormentors and comes across a book patterned on career books; this one, however, is about becoming a wizard. She reads the first part of it, says the oath, and she’s suddenly aware of some magic she’s always known about but didn’t know it was magic. She’s also thrust into a plot by the ultimate bad guy to destroy the universe when she goes looking for a missing pen. So she and another young wizard travel to an alternate reality along with a small, sentient wormhole sidekick to try to find a magickal book that can protect the world (all worlds) from destruction.

It’s the beginning of a series, so it must have had some success. Back in the day, I read some fantasy–Jack Chalker comes to mind, and Alan Dean Foster’s Spellsinger series. But by the time I was the age of the protagonists, I’d bypassed the young adult fantasy in favor of adult books. Which is why I hadn’t heard of this series until now. It must have been a pretty good run, as this book was still in print thirteen years later.

It wasn’t my bag, baby. So I’ll probably not look out for the rest of the series. I’ll probably pass this copy onto my young adult reader and perhaps he’ll enjoy it more.