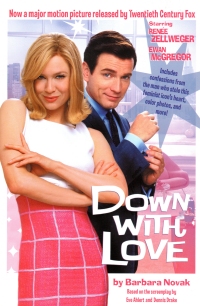 I bought this book at an estate sale nine years ago, and it’s often been in the front ranks of a bookshelf when I’m looking for something to read. A couple of times I picked it up and thought about reading it, but put it back. Well, gentle reader, I have finally read it.

The book, if you cannot tell from the cover, is a movie tie-in for the film with Renee Zellweger and Ewan McGregor. Remember it? Without the book, I wouldn’t know of it, either. At any rate, it’s a romantic comedy set in the 1960s where a farm girl from Maine has written a female-empowering book that takes the world by storm. Some finagling by her editor gets her an interview in the hottest magazine, written by the womanizing ace reporter nicknamed “Catch.” Hijinks and shopping ensue as they discover eventually that they’re perfect together. All according to her plan. Spoiler alert, retroactively.

At any rate, it sure must have relied on the actors and the filming for the humor, for I didn’t see much. To add depth to the book, the author adds a bunch about clothing, outfits, and shopping. I wonder if that’s the influence of Sex in the City or something. I dunno, although I have a Candace Bushnell novel around here someplace and maybe I’ll eventually be able to briefly compare the two in my own mind.

At any rate, it was a quick, forgettable read. Now I’ll have to find something else to pick up and put down without reading for a decade.