We bought so many books yesterday, I should have a hangover. I almost do, but we’ll come to that bye and bye.

We decided, as it was a cool (only 90 degrees at 8:00am) morning, to walk to a couple nearby yard sales with the boy in the stoller. So we loaded up on all our spare cash and a couple vessels of water, and we headed southwest to the outlying small home subdivisions of Old Trees, Missouri.

We found a yard sale selling cassettes for a quarter, specializing in 80s music, so we loaded up on Barry Manilow and some country and western (Heather being the operative part of we here) and a couple of CDs (Billy Ocean’s Love Zone and Roxette’s Joyride) for fifty cents each. Then we passed through a couple small but well organized (Heather said) sales featuring kids stuff (how disorganized can you be with very little, I asked). Then we hit a nearby estate sale, and the gluttony occured.

Friends, the people handling the affairs of this gentleman had his books and cassettes priced at twenty-five cents each, at which point “Because we’re walking and you’ll have to carry them” doesn’t hold up as an excuse not to buy. I mean, we did have a cart/dolly since the boy could walk now. About time he starts learning how to walk for distance.

I mean, look at this haul: 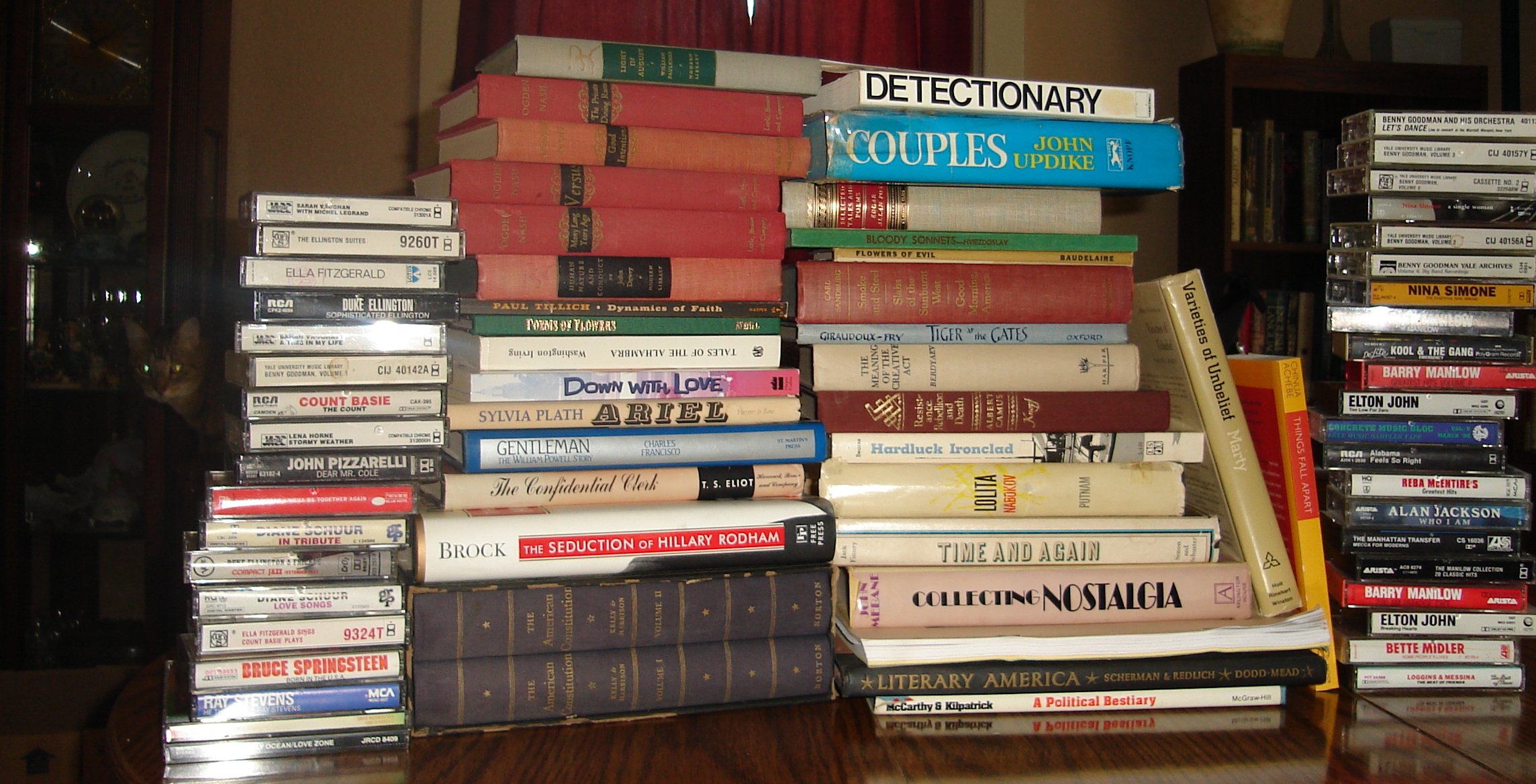 The gentleman’s collection of music focused on Big Band and jazz, so while Heather helped herself to some Benny Goodman (or Benny Youngman–whichever was the musician and not the comedian), I got some Sarah Vaughn, John Pizarrelli, Ella Fitzgerald, Lena Horne, and Diana Schuur. The books included some serious literature, a pile of art books and some very nice and old art museum supporter giveaways, and a few conservative tomes. Of which, I acquired:

You can see Heather’s two books standing upright; if I had seen Varieties of Unbelief, I probably would have nabbed it for myself.

That’s 32 books for me, 2 for Mrs. Noggle, and a collection of audiocassettes for Heather to rip into digital format, ensuring that she’s not bored well into 2009.

So I better stop reading long classical works and take time to clear some of the shorter reads off of my shelves or I will face a space crunch. I mean, a greater space crunch than I have now.

And I carried the collection, some 45 pounds of it, the half mile or so home. You know, it used to be automatic that I could do that, but perhaps it’s because I’m aging or because I think I’m aging that I mentally pause before doing it (without actually pausing, you see, because that’s unmanly). As a result, my shoulders are a little tight today, but that only means they’ll look better tomorrow. Lots of books and ripped shoulders: this is possibly the best book sale ever.