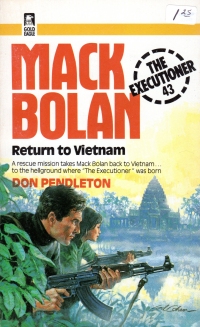 This book shares an awful lot of plot with The New War. Grimaldi flies Mack Bolan into the jungle, where Bolan is supposed to rescue a man from an enemy camp, and then Grimaldi returns to save the day.

This time, though, Bolan is returning to Vietnam to exfiltrate a soldier who stayed behind and who knows about American POWs still held by the Vietnamese. He joins up with some Hmong in-country and runs into difficulty when a beautiful resistance fighter fancies Bolan over another man in her unit, and that man is a hothead who might cross Bolan to get the girl.

Unfortunately, this book was a bit of a slog for a variety of reasons. For starters, there are some technical inaccuracies to consider: For starters, the method of getting Bolan into the jungle is for him to eject from a Harrier (the new hotness at the time), and then for the Harrier to fly back to base. With part of the canopy missing. Presumably, Bolan will land and go on fighting, albeit an inch or two shorter for the time being (ejecting from a fighter is not the same as jumping from a skydiving school, kids; it’s a violent action that sometimes knocks the ejected unconscious). Then there’s a lot of bringing weapons up to the hip in firing position. Oh, and the firsts. When thinking about how good Grimaldi is, Bolan thinks, “I’m a pretty good pilot myself.” Uh. That’s new. And he lights a cigarette. And he sheds a tear. So Bolan in this book is a bit more of a stock action hero than the man shaped by the history of the first forty books in the series. He even moons over the Hmong woman even though he’s got the love of his life in America. On the other hand, the contact with Stony Man Farm is dismissed, and we don’t get chapters of Hal and April fretting or remembering what an awesome guy Bolan is, either.

Still, I think I’ll take a break from the series for a bit.

Oh, and if you’re wondering whether I’m actually reading Julius Caesar or merely using its presence on my chairside table as a pretext to read junk: I’ve finished The Civil War, but it’s all Super Mario Brothers on poor Caesar. “Thank you, Caesar, but victory is in another castle!” And so Caesar is off to Egypt. I’ve got the Alexandrian War and the Spanish War to go.