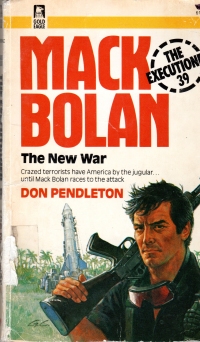 This book is the first that Don Pendleton did not write in the Mack Bolan/the Executioner series, and, boy howdy, don’t we know it. Fantastic Fiction says it was written by Saul Wernick, and I’m pleased to see this is the only entry this particular author wrote in the series.

In it, Mack Bolan goes to Columbia or Panama to exfiltrate or eliminate an agent with intimate knowledge of…something. When Bolan gets there just ahead of a hurricane, he finds the jungle lair of Islamic terrorists is a missile base and a base capable of reprogramming satellites. The makers of the satellites have provided a liaison to help the bad guys log into the satellites for some undisclosed reason. The bad guys’ bosses in the middle east want them to launch the missiles, but in the jungle, the terrorists’ plan is far more dramatic: to crash a satellite into the Panama Canal. So it’s up to Bolan to stop the plan, save the day, exfiltrate the agent and an attractive defector from the cause, and the pilots of the first helicopter that arrived to retrieve him.

So, plotwise, it’s an international thriller and not just a mafia hit. But the style of the writing is the real Louisville Slugger to the cranium. It’s less gritty and consistently introspective as the Pendleton books; it’s more florid in descriptions and does the Men’s Adventure thing with the guns, although when someone brings an automatic weapon up to the hip “in firing position,” one has to recognize that fifteen year old video gamers are probably better versed in military operations, practices, and tactics than your average men’s adventure paperback writer in the golden age of the paperback original.

Also, the guy had a thing for exclamation points. In prose. Fiction. A lot! And the plot, although workable, didn’t use much of the supporting players. Only the pilot Grimaldi makes an appearance, dramatically appearing in the hurricane with a gunship. Also, the book lacks tension, as the risk to Bolan is told rather than actually conveyed in the text. He eliminates half the base on one sortie and then worries about the other half on the next sortie. At one point, we’re concerned about all the people Bolan has to protect, then after Grimaldi’s heroic flight through the hurricane, he arrives at Bolan’s camp. And, hey, right behind him is a rescue chopper! How conveniently placed to take care of one plot point.

A subpar outing in the series, I hope. Although I’ve read a couple in the line after Pendleton and they haven’t made much impression on me. They will make more of an impression and get more of a direct comparison here as I read them consecutively and pretty quickly.

You’re not really asking, but I’ll tell you I’m almost done with the Gallic War by Caesar; I’m to Book VIII which was written after Caesar’s death to complete the account. It was written by someone other than Caesar, or so the story goes. Or did Julius Caesar fake his death? This is the Internet. All possibilities are equally valid unless they require contact with the actual physical world.