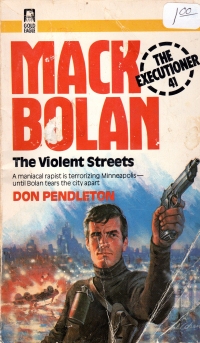 This book finds Mack Bolan in St. Paul immediately after returning from Turkey (as described in Double Crossfire, which I read in 2010 before I filled in gaps in the series). One of the Stony Man operative’s sister has been raped, and it’s a like several other rape/killings that have been haunting the Minnesota capital for years, off and on. Bolan investigates and discovers that elements of the police are covering it up because the suspect is the son of an elected official, and they want to use the knowledge and cover up as blackmail on the pol.

Then Bolan shoots most of the bad guys. finis.

Still, it’s a good read, certainly better than The New War, and I can see now how the house, by removing Bolan’s focus solely on the mob, broadens the variety of plots and adventures Bolan can have (and by now has had). This one is a little more vigilantish with the bad guys not being terrorists or external enemies, but domestic crime elements. This will definitely keep the series fresh. Unfortunately, the Bolan War Journal asides that talk philosophically about the nature of Man and the Hobbesian worldview must be mandatory, and in some books they’re not grafted well into the narrative. Instead, whole chapters are dropped in with a couple of nouns changed to reflect the current plot. Also, the books generally contain a roll-up of the overarching storyline from the Bolan books, especially the Mob War of the Pendleton books. These, too, jar expositionally when they’re inserted. They’ll probably move away from them as the number of non-Pendleton books increases, but they don’t aren’t well done in these early books.