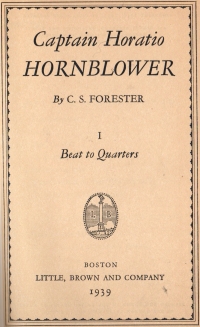 Apparently, I like to read a maritime adventure story in the winter time. Last year in January, I read The Sea Wolf. This year, I’ve read this book, the first in the 12 volume Horatio Hornblower series.

The setting of the book more reflect the Aubrey/Maturin books of Patrick O’Brian (I read Master and Commander back in 2009) than the Jack London book. In it, Captain Horatio Hornblower takes his English frigate the long way across the Pacific to link up with a Spanish rebel on the west coast of Central America. When he arrives after seven months at sea, he finds a madman (a la Colonel Kurtz of The Heart of Darkness) who has declared his independence from the Spanish crown and who has drawn the attention of a fifty-gun Spanish ship. Hornblower lays a trap for the bigger ship and takes it without any loss of life, but the madman demands it–so Hornblower, still under orders to support the fellow, turns over the ship. When Hornblower travels south, he encounters a Spanish ship bearing new orders: He is now an ally of Spain, and he must retake the ship he just gave to the madman. So he goes.

The book is more adventure story than Clancy (or O’Brian)-esque treatise on seamanship. So although it includes details of the workings of nautical vessels back in the day, it doesn’t detract from the story (see also Captain’s Courageous by Kipling). I liked it well enough that I want to find the rest of the series and read them, too.

It left me hungry for more so much that I wanted to grab the next of the O’Brian books that I have instead, but somehow, in turning my bookshelves over last year, I have temporarily misplaced ten or so paperbacks. Which is to say they are not in the place in the bookshelves where they’d resided for years. When I mentioned it to my beautiful wife, she also looked where they’d been, but they are no longer there. I’ll find them eventually, and I’ll probably read one because I liked Beat to Quarters so much.

So take that as a ringing endorsement. As much as you get from this blog, anyway.