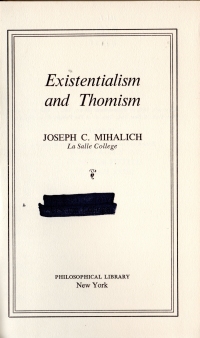 This book is a Thomist critique of Existentialism. Ho, boy, let’s get into some weeds.

Thomism is a philosophical system based on the works of St. Thomas Aquinas, a monk from the 13th century who wrote several thousand pages of reasoning including Summa Theologica. The philosophy is the only philosophy taught officially in the Catholic church’s seminaries and whatnot. The university I went to was apparently a hotbed of Thomism in the 1950s, or so I heard, but it did teach other systems of thought to its students. Including Existentialism. At any rate, this book looks like it’s still in print 55 years later, and that’s probably mostly because of its role in teaching Existentialism to bishops and Jesuits. But it could partly be because it’s fairly accessible.

This book is short (88 pages) and collects five separate essays that target some places where Existentialism is systemized. The essays include:

I’m normally a primary source kind of fellow, so I’ve some familiarity with the Sartre mentioned above, and I’ve heard the names Heidegger, Hegel, and Husserl in my college classes. Heck, I might even have read them.

So if you’re into Existentialist thought or explore it a bit, this book can serve that role for you quite nicely. It’s approachable, but it does get into deeper analysis of cognition, perception, and reality. It’s not too heady for most of it if you’re just a lightweight Existentialist who has read The Stranger and Nauseau and never even tried Being and Nothingness (I did just that: try), and the stuff that is heady does lean a little on you already knowing some terms of philosophy, so it’s not too hard to follow and even understand.