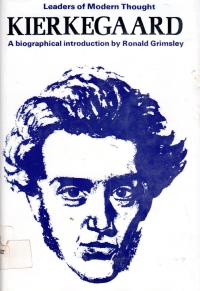 When I cleaned up my library this year, I found this book, and I thought, “Silly boy! You’ve already read that!”

This book includes a biography, of course, and then runs through Kierkegaard’s publication history and thought. This book examines more his philosophical thought rather than his theological thought, as the series is not a theology series, so I enjoyed it a bit more and might have gotten more out of it. It certainly cemented for me how Kierkegaard was at the forefront of Existentialist thought, the origin of themes such as existence-in-action and whatnot. You know, how a person/soul is not static, but is defined by its actions and that it is always deciding and that makes it what it is.

At any rate, I got a lot out of this book, albeit slowly. It made me want to read next in my Kierkegaard exploration The Concept of Dread or The Sickness Unto Death (or both in that order), but all I’ve got on hand is Either/Or (or perhaps some others–perhaps I should organize my to-read shelves so I can better gauge this).

However, I’ve read a lot of Existentialism and modern thought this year, what with the Kierkegaard (Fear and Trembling) as well as some Tillich and other things I’ve started and put down. Perhaps I need to take a break from Existentialism for a while.