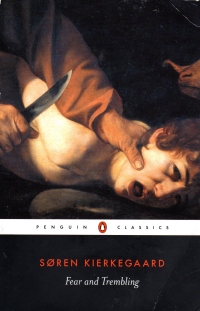 I cannot remember whether I started this book or Søren Kierkegaard first. However, I sure finished the other Cliff Notes-esque summary of Kierkegaard’s thought first. Because, face it, Kierkegaard is not a quick read.

First, a note about the translation: As you know, any translated literature I find just a bit suspect because the translator makes some changes to try to illustrate the intent of the original in the second language or the translator does not and lets the idioms fall where they may. As I do not speak Danish, I have no idea what tack the translator did. It’s coupled with the almost two centuries of time that have passed. One telling word choice that jarred me was vaudeville. Certainly Kierkegaard did not use a direct translation since he preceded the American theatre form by half a century or so. Another, more important example: this book uses absurd an awful lot. I get that a lot in translations of Sartre and Camus, too. So was Kierkegaard the origin of the concept that the later Frenchmen picked up on, or was the translator aligning some word of Kierkegaard’s to the common Existentialist expression? I suppose if I had time or inclination, I could delve into it. But I don’t.

At any rate, the book is a long musing on the meaning of what it is to be truly religious. As we learned from Søren Kierkegaard, this book comes after Either/Or, and where that book identifies two spheres of man’s activity (the aesthetic and the ethical), this volume explores a yet higher sphere, the religious. It does so by musing at great length upon the story of Abraham and Isaac. Abraham, a good and faithful man, is told by God to sacrifice his only son. So Abraham bundles the boy up and heads to the designated spot, whereupon God stays Abraham’s hand. Abraham is beyond the ethical in this because he was going to do an unethical thing for his faith, and because he did he became the father of religions.

To make a long story short, to be religious requires one to live in the paradox, the absurd. You have to hold two things in mind and heart at the same time that cannot be true.

I was unconvinced by the arguments, and I didn’t really enjoy the book. Although there were some tweet-worthy aphorisms within it, the writing style was convoluted and wordy, perhaps on purpose. But the paragraphs were as long as a page at times, which hindered me, as I sometimes picked up the book after a couple of days away from it and then would read a couple preceding paragraphs to refresh me as to where I was. In many cases, I had to re-read several complete pages.

You know, Kierkegaard might have been a genius–he was certainly well-read, as the allusions in the book indicate. However, it’s not a fun read. It’s not a quick read. I had to gut out the last forty or fifty pages. I’ve started and gotten most of the way through too many theology and philosophy books over the last year, so I was determined to read it. And I did. But I’m not eager to delve into more Kierkegaard, which is unfortunate, because I got Either/Or for Father’s Day. And that book is twice the size of this one. Perhaps I’ll put it on the shelf, let it marinate a while, and then convince myself that the thicker volume won’t be like this one.

Now, onto finishing the Tillich perhaps.