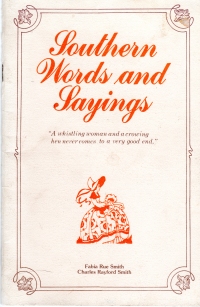 Well, hang my britches and slap my hound, but this book is listed on Amazon for between $30 and $55. Whether it sells for that is a rather different matter. Still, I got it as part of a pack of similar books (Boogar Hollow’s Scraps of Wisdom, How To Talk Pure Ozark, and How To Speak Southern) for a buck from the Friends of the Springfield-Greene County Book Sale this autumn for a buck. So I might be way out ahead here in the fictional money of Internet e-commerce.

At any rate, where the other books play it for laughs, this book plays it pretty straight. Its goal is not humor, but rather an actual account of the ways people speak. I guess it spoke to some people, as the copy I have is in the sixth printing from twelve years after the original.

So it’s a bit informative; I suppose it might be so if one has spent one’s life living in a semi-southern state. As I’ve discovered with the other books, some of these sayings are just part of my vernacular.

The book also includes some food-related words that identify some elements of Southern cooking, some portent-based sayings, and some general colorful sayings and idioms.

Not a bad thing to flip through; it’s a couple dozen pages of listicle in a chapbook form from an era when this is the way these cultural memes were transmitted. Well, as cultural memes. The actual content was conveyed orally amongst families, neighbors, and peers.