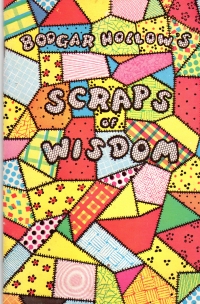 This book is a cross between the southern language dictionaries I’ve been reading of late How To Talk Pure Ozark and How To Speak Southern) and Poor Richard’s Almanack: Benjamin Franklin’s Best Sayings which I read earlier this year. As such, it’s a pithy collection of observations about life and advice.

The book itself is in chapbook form, which is what I think when I think cardstock cover over photocopied and saddle-stapled booklets. Instead of typewriting them or using Microsoft Word on them (which Dan Rather insists is truthy for the time period), someone hand-lettered the pages and hand-drew the graphics and images therein. That’s a lot more work than we have to go through in 2015 to do professional quality work, my friends.

Apparently, this was one of a series of Boogar Hollow books; the front material lists several titles in the series. I hope the couple that put these together about the time of my birth broke even at least on them. At the very least, I’ll bet they had fun.