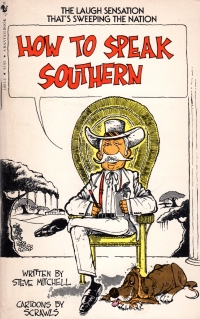 This book was written by a Palm Beach Post columnist and illustrated by a cartoonist at the same. It’s funny, but you don’t tend to think of Florida as the south probably because it was really not much but swamp and heat throughout much of our nation’s history and because it was not a big part of the Civil War (although, undoubtedly, there are Florida Civil War buffs who will testify that it really was–as many Missourians will tell you about all the firsts of the Battle of Wilson’s Creek just up on that hill over there). Although the author himself is from North Carolina, which is the most north you can be in the south.

At any rate, the small book is mildly amusing; it’s written in glossary style from Ah to Zat. If you liked Jeff Foxworthy twenty years later, you’ll like this book. A lot of his schtick and even a bit of his about how Southerners talk mirror its content, but I guess that would have to be the case with Southern comedians with accents. You never hear about comedians from Wisconsin and Minnesota doing bits about the northern accent, do you? I don’t.

The book was a bit educational, too, as it explains the etimology of the phrase spittin’ image, which is a corruption, pardon me, Southerners, correction of “spirit and image.” I see, that makes sense.

At any rate, I got this as part of a bundle I bought last Thursday, and I was so eager to look through the titles within that I put on a meaningless football game just so I could flip through books during it.

So it’s not a bad waste of 30 minutes unlike some of the things I flip through.