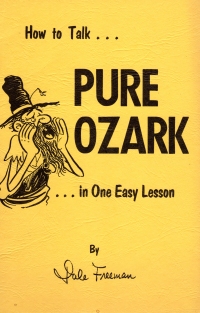 This book is very similar to How To Speak Southern. It was written by a newspaperman (in this instance, a Springfield newspaper editor) based on some columns or essays, and this one dates back to 1961. It did not get nationwide distribution, though: this is a chapbook and was probably only locally distributed and not for very long.

It also collects phonetically spelled Ozark accent words in a dictionary form; however, this one had thinner, less humorous definitions, so it was a bit less enjoyable to go through. It has a lot of overlap with the later collection (not directly–nobody’s plagiarizing here), but enough so that it was not fresh. Sometimes I had to read the words a couple of times because in some instances, instead of giving a definition, the word would include a sample of it in an Ozarks sentence. Which was full of other Ozarks words, so I had to read it a couple of times to figure out what word it was supposed to be. You know, having to work for the punch line doesn’t make humor more rewarding.

As in the previous book, this one includes something I didn’t think was a particular Southernism: The word mull meaning “to think over.” Of course, in this instance, it only identifies the definition of the word and not its etimology, so I have no idea why this is particularly Southern.

So I didn’t really learn anything from the book, and I’m not sure how true-to-life it is 50+ years after it was written. Much of the Pure Ozark sounds a lot like South City Hoosier. Of course, the line of my family that lived in Lemay a long time and pronounced the French invisible R in toilet and wash originated in the Ozarks anyway. So there I go.