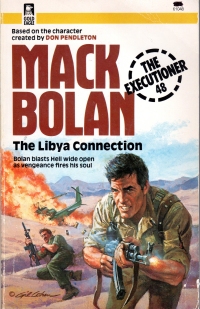 You’re forgiven if you think I’ve read this book before–after all, the immediately post-Pendleton Executioner books have a single plot with different locations and, if you’ll pardon the pun, different execution by the different house authors. But, no, I was remembering that I’d read a book called The Libyan Contract. Which was written about eight years before this book (and I read it five years ago, if we’re really into historical records). It shares a certain element of plot that I’ll get to in a moment.

At any rate, it has a similar complaint to the others I’ve read this year: The plot is basically the same. Bolan has to go somewhere exotic to rescue someone and defeat some terrorist plot in the midst. In this case, he’s going to Libya to track down a Puerto Rican agent he’s worked with along with a military shipment of a biological weapon. As in The Libyan Connection, the American agent helps to preserve Khaddafi as the ruler as Bolan thwarts a Soviet-backed coup in the process.

As I read these forty-year-old thrillers, I can’t help but wonder: What if there’s a conspiracy amongst thriller writers to keep the world in an agitated state of turmoil which is why the same places keep boiling up time and again? It’s either that, or history marches at a pace of decades, which means it’s too long for myopic modern audiences to understand or to support when it comes to cultural and military conflict. But, sadly, that’s a very reality-centric view that gets no truck from modern American consumers.