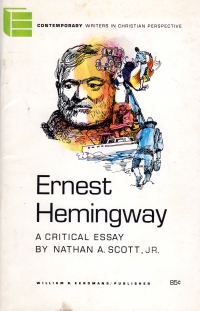 This book does not appear to have been a library book; however, it is of the time period (1966-1968) of the last few books I read. So there’s that.

Like the 1959 booklet Ernest Hemingway, it’s a short pamphlet, targeted to college students perhaps, that discusses the work of Ernest Hemingway. This book is from a series called Contemporary Writers in Christian Perspective, so it has a little bit of that going on.

There’s a short bio that captures the highlights of Hemingway: A child who liked the outdoors, a veteran(ish) of World War I, a newspaperman who lived in Paris and began his writing career there, and the time frame of his major works. Then this author describes a couple threads in Hemingway’s work, the ethics of the man living up to an ideal, the piety, the belief in the healing powers and almost sacred nature of, erm, nature. Then the author goes onto a little rant about people who find fault with Christians finding Christian themes in books that are not found in the Christian fiction section of the book store (well, that’s a contemporary thing, but you get the idea).

Overall this author approves of the work of Hemingway, as do I. So I’m going to start saving up for those complete collections of Hemingway that cost thousands of dollars. All I need to do is forego book sales for the next two hundred years.