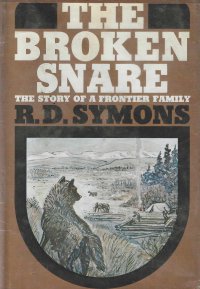 Well, I seasoned this book well enough. I bought it in October 2012 at the Friends of the Christian County Library book sale. It must have been on the shelves at the Christian County Library for a while, as it has pockets for the cards they used to use for checkouts and it has the bar code for computer checkouts, which meant that it was probably on the bookshelves in a small southwest Missouri library for nearly forty years. Hopefully, they put it into the book sale to make more room for books, albeit by 2012, books were well into being pushed aside for computers.

I have to admit that I’ve confused this book with The Broken Spears, a book about the Spanish conquest of the vulgar Aztecs that I bought in 2008. I’ve gone looking for that book a time or two on my shelves, but did not find it. I must have found this book at one point, as it had one of my bookmarks in it (no Found Bookmarks post–it was a Friends of the Springfield-Greene County Library book sale whose date was after I owned the book), but I abandoned it as a bit dry. Which must mean I delved into it last before I went through the Little House books in, what, 2018-2019? Maybe those children’s books prepared me for this volume.

So, the “plot”: A Canadian, his urban English wife, and two young boys (later joined by a much younger sister) homestead out in the western part of Canada. The father finds a nice valley where he can stake a claim, and they build a ranch over time, which starts with living in tents but culminates in a cabin. It also goes into the accumulation of cattle, which is less dramatic than in Bendigo Shafter–the cattle and horses are built over time, dealing with local “horse traders” who are probably also horse thieves. And the book also changes point of view to two anthromorphized animals: a cow moose bearing young and an old wolf with a three-pawed wife who bedevil the family known as “The Man”, “The Woman”, “The Kid”, “The Boy”, and eventually “Small.”

So some of it is clearly fictional and some is not, but the actual balance is unclear–if you look for the author on the Internet, you don’t get a big presence–remember, this book was from when ARPANET was three or so–but you do get stories about his impact on art and the west (akin to Charles Russell, which is to say significant among people who knows who he is), but you also get comments from people who knew him as a park ranger or in his other pursuits. So, again, like Buff Lamb: Lion of the Ozarks, we have some history overlapping with the present, or with people you know in the present.

But: In spite of this book containing horses, pack mules, and eventually cars and bulldozers, this book takes place 50 years(!) after the little house books. I mean, the book mentions the Depression in passing, but when The Kid decides to join the military, he goes to the Korean War. By that time, my elderly church associate had already stopped trick-or-treating at the elderly Laura Ingalls Wilder house in Mansfield.

At any rate, an interesting read, and proof that sometimes I have to be ready to read a book when I read it. The previous time, I was not, but I read it through this time. Not at a great rate like an old timey (less than 300 pages) suspense novel which I could read in a day (this book, at 224 pages, took me a bit), but still interesting, and a connection to a past that I would say is forgotten, but it’s a past that’s unimagined by kids today.