I might have mentioned that my Facebook feed is basically ads, promoted posts (Suggested for you, I suspect, is just an ad by another name), a couple things from people I went to high school with, a posts from Gimlet’s wife showing their kids, bible quote posts from that guy who runs 5Ks in a Speedo and then his, erm, saucy comments on the posts of Influencers who showcase their legs, rock music posts, and old movie posts. I’m not sure whether the algorithm has improved my engagement–sometimes I slow down a bit on some of the posts, but I don’t click buttons on them.

But they do give me blog fodder.

Like this one from some twee pop culture site which is going to tell me about martial arts: 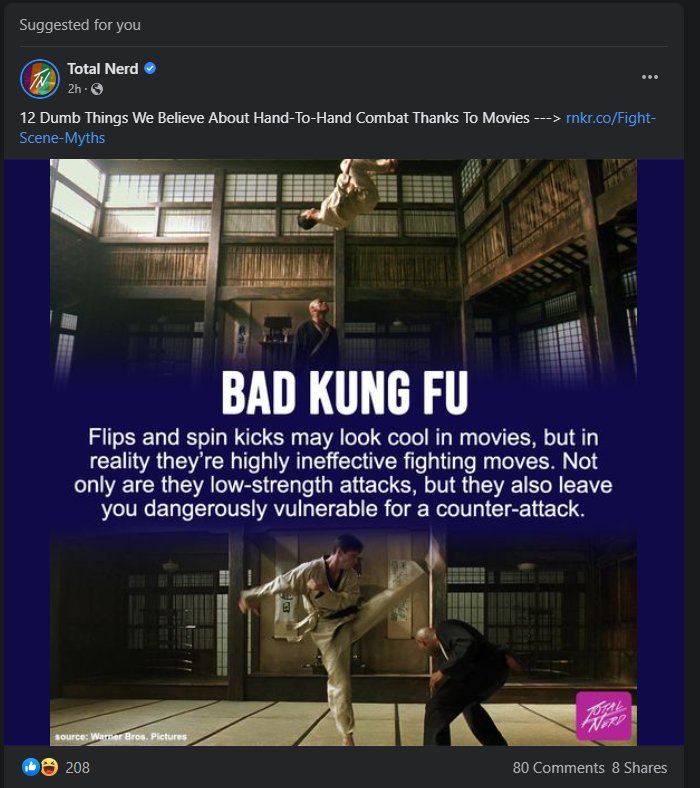 A spin kick (or a jump spin kick) or something like a spin knife hand can be just as powerful or more powerful than a lift or step kick. A spin heel kick, for example, can combine the motion of the spin with the motion of just the leg to knock someone’s block off. And we’re not allowed to throw spin ridge hands in touch sparring because it’s too powerful–and, to be honest, too easy to miss your distance and timing so that you hit someone full power, that is, hard enough to hurt them.

You don’t throw a spin kick first, though, because the wind up is quite visible. However, if you want to throw two strikes from the same side, or if you want to use the momentum from the twist of your body to add power to a second strike, you use the spin. Say you’re in a guard stance with your left side forward (if you’re right handed, this is kind of natural). When you throw a turn round kick with your back leg, you pivot on your left leg as turn your body to strike with your riight leg.
Your body is already rotating counterclockwise, so you can put the right leg and continue the momentum, pivoting now on your right to spin and kick with your left leg. It’s one motion, and it can be quick and smooth.

As to flips, I agree, that’s cinematic. But rolls have their place. My current school does not emphasize forward and backward rolls as much as the bujinikan dojo where I studied for a few months. Rolls are helpful when you lose your balance and have to regain your feet relatively quickly. Standing back up is slow, but carrying the momentum of the fall a little further until your feet are under you is not. This is most useful for martial arts that emphasize strikes from a standing position, not necessarily grappling arts like Brazilian Jui-Jitsu.

Of course, that’s only the experience of a experience and perspective of an eight-year student of martial arts who’s off to get his but kicked in a black belt boot camp later today ahead of perhaps rank confirmation testing next weekend and not that of an actual instructor or an Internet listicle writer.

And, no, I did not click through to the actual listicle to see what the other 11 dumb things. No need reward the algorithm for showing this to me.