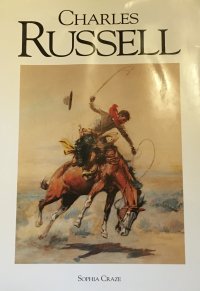 I got this book at ABC Books a week ago. I think in lieu of reading during football games, I will set artists’ monographs and travel books beside the recliner to browse through after a couple chapters or sections of other books I’m reading. Kind of like I used to do with comic books. I’ll use them to fill out the evening when I don’t want to start another chapter before bed.

This book gives a brief bio of Russell, a native of St. Louis and the child of a well-to-do family (Russell Avenue might well be named after the family), who decided early that he wanted to be a cowboy. The family, of course, were against it and tried to get him schooled and whatnot, but he kept hanging around with unsavory types. So they sent him out to Montana hoping to get it out of his system, but he caught on as a cowboy and whatnot until he found that he could draw and paint, and he became known as the cowboy artist. Unlike Frederic Remington, Russell did work from the frontier, but he did visit and have art shows back east and around the world.

You know, Russell is active painting and whatnot at the same time that Laura Ingalls Wilder’s Little House books cover, but it’s a very different frontier. Of course, the images would have to be more dramatic and marketable with images of cowboys and Indians and whatnot. That and perhaps the difference in locations explain the differences in the depictions.

“So, Brian J., Remington or Russell?” you might ask. To be honest, I guess it’s been ten years since I reviewed the Remington monograph. The works of both artists tend to be dramatic, with action depicted, and I prefer my art to be a little more still. Renoir portraits and landscapes and whatnot. So Remington and Russell are of a type that’s interesting to look at briefly, but not something I would hang on the walls of my home nor sit on a bench in an art museum and contemplate. Not that I do that with art that I do like, either.

So Remington and Russell. If that’s not a cop-out.