I know, it’s been a whole week since I was at ABC Books, but as I announced as I entered, I had read three of the books (out of seven) that I bought last week so I needed more.

Actually, I visited because ABC Books hosted Donald D. Shockley for a book signing, and, as you know, I go up to get signed books whenever I can.

I only got four books this trip. Well, five, sort of. 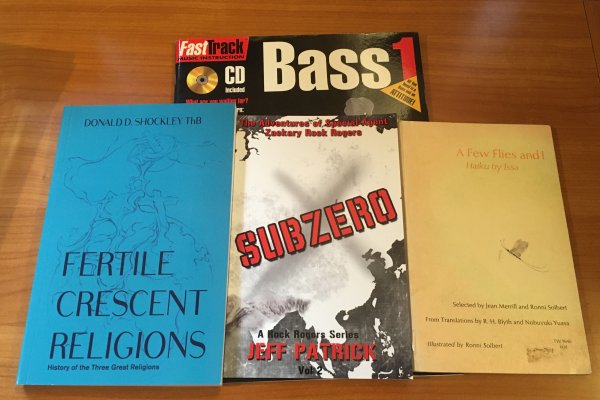 I will leave it up to you, gentle reader, to speculate as to which of the books I read first. I think it might be the Jeff Patrick book, as I’ve got a couple volumes of poetry in the poetry-reading queue already. I won’t actually “read” the bass book–books on how to play musical instruments are like technology/how to program or reference books in that I don’t go through them from beginning to end in a way that I do with fiction, other non-fiction, or poetry. I don’t get around to reviewing them because I never actually “finish” the book. Also, I don’t have a great track record on learning the skills in the books, either, but that’s more me than the books themselves.

At any rate, it was good to go to an author signing again.