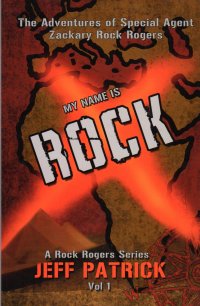 I bought this book last weekend before our getaway (given how often I’m using that phrase in book reports this week, I should make a macro out of it). This, however, was the first of the books I read.

It’s the first in a series, and it reads more young adult than adult thriller. It weighs in at 144 pages total which includes the title/copyright pages, a list of characters, and a couple of pages of information about the guns in the book as well as the about the author pages, a sample of a later book, and promotional pages for other books in the series. So it’s not very long at all. The prose is very simple. The set pieces are set, but also simple. You can see that the author is kind of patterning the books after men’s adventure thrillers.

In this book, agent Zackary Rock Rogers is called to rescue the stepson of a Senator who’s being held in northern Africa by bad guys for a ransom. Other agents in the area have died suspiciously, and it becomes clear that someone on the inside is a double-agent. But he must effect rescue before the kidnappers realize the ransom isn’t coming.

As I said, some set pieces connected a little more simply than in a Mack Bolan book. So it’s a little better than the worst of the Executioner novels but not as good as the best of the line.

I note that the book has a prologue that comes from an exciting moment later in the book. If I had to guess, I’d say someone told him that it started out too slow and he should start it off with a bang. I say that because someone told me that about John Donnelly’s Gold, and for one draft, I did the same thing–pulled a dramatic scene (the break-in scene to the point of entering John Donnelly’s house) as a prologue, which made the first chapters of the book a flashback, I guess. I thought it a cheat and removed it from my book. I’m not sure it really works in this book, either.

I won’t write the series off–I’ll maybe try another at some future time to see how the author might mature. But not anytime soon. I’ve got plenty of other things to read, including a couple dozen of those lesser entries in the Mack Bolan series.