So yesterday was the last day of my vacation, at least the weekday portion, so I took the boys on what has been our traditional outing: We go bowling, and then we go to the nature center.

We’ve done this summers when they’ve not been in “camps” (read: temporary, themed day care without the stigmatic name) or on holidays like MLK Day or Presidents’ Day. One summer, we did participated in the local “Kids Bowl Free” promotion which gives registered kids under 18 two free games of bowling as long as they’ve got a parent with them paying some freight. So we went, what, every week? Twice some weeks? A lot. But my boys didn’t get into bowling really because it requires skill and patience and taking advice for improvement. But we got to know Cathy and June at Sunshine Lanes a bit. But that was, what, four years ago? Our visits have tailed off to once a year to the bowling alley. And less to the nature center.

But yesterday, we rekindled the tradition. And, hopefully, started a new one. 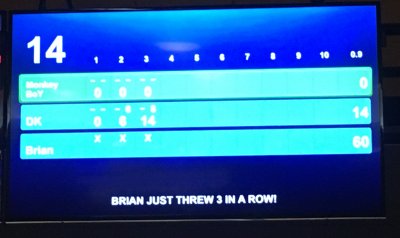 I got a turkey. Which is three strikes in a row. To start the game.

Jeez, am I bragging again after showing off conspicuous consumption again? I never can tell how insufferable I might be to others, which is my blessing and my curse. But it’s my blog. So you hear about my turkey in.

I’ve never thrown three strikes in a row before. And I might not again. As a matter of face, I did not even pick up a spare the rest of the game until the tenth frame (and then threw a strike on the extra ball), so I ended up with a rather pedestrian 143 on a game where I had a perfect 300 game going through three frames.

At any rate, we went to the nature center next. The building with the animal and ecology exhibits was closed yet as were the bathrooms (which made me glad that I went at the bowling alley). We did the whole loop, a little over two and a half miles, and as we walked along the boardwalk above a glade, a bird crossed the path ahead of us and joined a friend right off the side of the boardwalk, and they stayed beside the boardwalk as we passed. 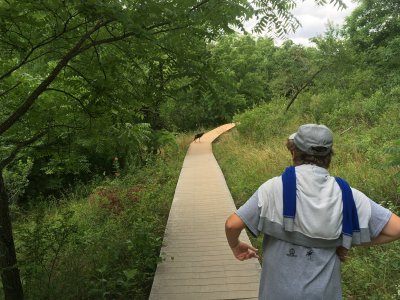 Wildlife at the nature center is very tame; the deer also are not afraid of people at all.

At any rate, all I wanted to say is that yesterday, I turkeyed in and I turkeyed out.

But, as you know, I also went to the antique mall, so it’s not factually accurate, but I did want to make the gag.