Sorry to continue with the conspicuous consumption that is the hallmark of these pages, but after we got back on Wednesday night from our trip to Branson, I went looking for my most recent annual pass to the Wilson’s Creek National Battlefield to see if I needed to get one before my boys and I take to bike the loop.

I could not find a pass, but I did find the remaining gift certificates for Relics Antique Mall that my beautiful wife gave me for last Christmas which apparently only have a six month shelf life. They were scheduled to expire on June 30. So I was very glad to have found them this Wednesday instead of next Wednesday. They were $70 worth of gift certificates. I would say “I can’t believe it’s been so long since I’ve been to Relics,” but Relics was closed for a bunch of that time.

I find it hard to spend gift certificates in the best of circumstances, but I really felt challenged to spend $70 at an antique mall. I mean, I don’t collect a lot of tchotchkes; I don’t have a lot of wall space for art (or furniture); and even with house money, I don’t want to spend the new-normal of seven to ten dollars on a record (!) because I’d get peeved if it skipped when I got it home. Also, as I had my boys along, I could not spend hours poring through the records anyway.

But I did get a couple. 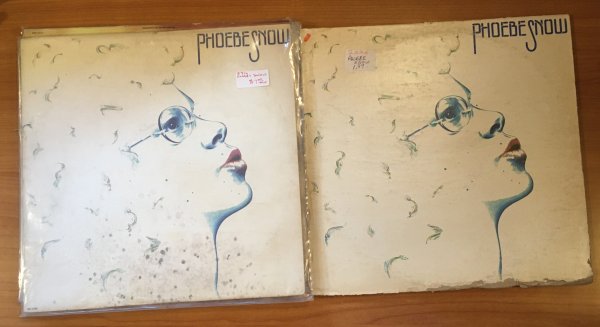 As you might remember, gentle reader, I first spotted a copy of this record at Relics whilst Christmas shopping in 2018, but I could not buy it as it did not have a price on it. And I have not seen another copy since. Today, I found two: One at $7.99 with 20% off and the second later at $1.99. Instead of taking the expensive one back, I bought them both. In case one skips.

I also got a couple other albums: Twilight Time and My Reverie by The Three Suns; The Sounds of Silence by Jane Morgan; and In A Mellotone by Duke Ellington and His Orchestra.

The selection of the antique mall records is starting to run towards 60s, 70s, and 80s rock and pop as well as country instead of the older stuff I like to accumulate. I guess my parents’ generation is reaching that dying or downsizing age, which is bringing that stuff to market, and it’s the stuff people my age in the album-buying mood wants to buy, which is why the records are so much more expensive. But I can generally still find things to buy in my mellow, easy listening genres that’s under $4 a record.

But, Brian J., that doesn’t add up to $70 even with the expensive Phoebe Snow album, you might notice.

So what else did I get? Say hello to my other little friend:

As I mentioned when I got my guitar in February 2018, I noodled around on a bass a bit in college. So now I’ve picked up a bass to mess around with again.

How’s that guitar playing coming, Brian J.? you might ask.

Shut up, Ted. That is, it has not gone well. I took lessons for a while and quit because I wasn’t finding a lot of time to practice between lessons, so I was not advancing much at all. So I discontinued the lessons and found even less time to practice. So it went kind of like the worst possible way short of electrocuting myself with the E string.

But now I have two such instruments in my office which will go much better.

But at least I got something for the gift certificates.