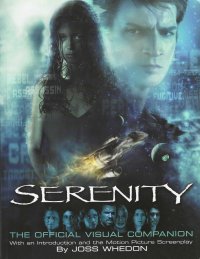 This book completes the four books I bought at Calvin’s Books the last time I went there. I was afraid that they were closing, as the Firefly books were only three dollars each, but they were not that inexpensive because they were closing. But they closed never the less.

So this book means the end of the road unless I find some of the comic books or the recent novels cheap. So I am a little sad to come to this end. I’m sure some of that is mixed in with missing Calvin’s Books as well, although I need more books like I need more sunny days without rain here at Nogglestead.

So: It’s the shooting script for the film Serenity. As a reminder, this film came out three years after the television series, so if you watched them altogether as we did, you’ll notice things. Jewel Staite, for example, lost some weight (she said she had to eat a bunch to keep at Kaylee weight for the series in one of the previous books). And they played the characters a little different, and it was cut without some of the humor and playfulness of the television series. So the tone was a lot darker–although it might have been more in the acting and editing than the scripting. And they try to answer a lot of the questions from the television series in a fashion that’s disappointing, not on the Lost scale, but still

The book also has some inside looks at the making of the film, as the previous book does, but having read Star Trek Memories earlier in the year, I notice quite a difference in tone in the descriptions of making the film, even the nitty gritty technical aspects of it. In Star Trek Memories, making a television show is a more blue collar affair, with discussions about hitting budgets and physically doing the work, whereas these books are more about artistic vision, and the people who worked on the show take themselves very seriously. Perhaps it’s a difference in the elapsed time between the books and the television show/movie they depict (26 years have elapsed between Star Trek and its book, whereas these books came out within a couple of years). Maybe it’s a generational shift between the movie makers or between the fandoms. I dunno.

The book talks about a possible movie franchise, but that did not pan out. Maybe killing a couple of the main characters and tweely solving all the mysteries will dim that prospect for you–at least in the Star Trek movies, they only got into the habit of blowing up the ship every movie.

But, you know what? It’s been almost twenty years. Maybe it’s time for a reboot.

As I said, I was a bit sad to come to the end of the books, so I started re-watching the television series. Time will tell if I make it through again and if I watch Serenity. I invited my boys to watch, but they were not interested. So I guess I should stop making allusions to the show since perhaps nobody younger than forty-something will get it or even care.