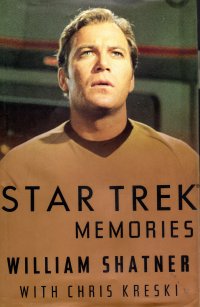 To be honest, when I finished Star Trek, I went looking for a Chuck Norris memoir I have somewhere in my office, but I came across this book instead, so I read it to fill in the Celebrity Memoir category in the 2022 Winter Reading Challenge.

Although, to be honest, I might be stretching the definition of memoir a bit to include this book since it’s not focused solely on the life of William Shatner. Instead, it talks about the production of the original Star Trek television series. Shatner (or Kreski) interviews a number of the people involved, including not only the actors (Leonard Nimoy, Nichelle Nichols, DeForest Kelley most prominently, although George Takei and Walter Koenig also appear–but James Doohan does not, as Shatner explains in the epilogue), but also some of the behind the scenes people, telling stories about Gene Roddenberry (recounted by Majel Barrett), Gene Coons (writer), D.C. Fontana (writer/secretary to Roddenberry), Bob Justman (producer), Fred Freiberger (producer), and even some of the lighting men and gaffers.

So it’s an interesting and insightful look into the show and its origins in the late 1960s.

You know, I cannot help but to compare it to the Firefly books I’ve read (Firefly: The Official Companion Volume One and Two and Firefly: Still Flying). While we don’t get shooting scripts or “new stories”–that’s what the Blish and Foster books are for–we do get paragraphs and stories with greater depth and emotion than the Firefly books which plumb to the equivalent depths of Entertainment Weekly sidebars. This book talks about The Kiss, political struggles to get the show on the air, details about the timelines of writing versus actually shooting the episodes (writers had weeks to come up with scripts, which the crew would then have five or six days to shoot), and even admits that the other actors didn’t appreciate Shatner’s approach and belief that he was the star of the show (Roddenberry admitted he was, but Nimoy got more attention as Spock, not necessarily to Nimoy’s liking–his autobiography of the time is called I Am Not Spock). So it’s got some dirty laundry–well, reality–mixed into the hagiography.

I flagged a couple of bits. Below the fold since this is getting long.

However, what none of us expected was that once George [Takei] actually got hold of his sword, he went crazy, absolutely nuts, literally bounding around our sets all day, slashing and jabbing at whoever dared to cross his path. I mean, Takei gets this dangerous weapon in his hand and he completely loses control, darting around the studio, swatting our crew guys and poking at big Teamster butts.

Oh, myyyyy. Takei came out in 2005; was Shatner foreshadowing here?

You know, for a while, Takei’s Internet posts got a lot of shares out there. But lately not so much. I hope he’s doing okay.

Nimoy on Spock and the eyebrow raise that spawned The Rock’s career forty years later:

And I always tried to play these scenes very dry, perhaps raising an eyebrow, but never more than that. In fact, in all these arguments, I always modeled Spock after George Burns and his cigar. George’s rather bemused, unflustered acceptance of Gracie’s ramblings really influenced Spock’s interaction with McCoy.

I know all about George Burns and his use of the cigar since he just talked about it in Gracie: A Love Story.

I Also Get It

In the chapter “My Favorite Episode”, Shatner names his favorite episode as “The Devil In The Dark” because he worked on it the afternoon after learning his father had died but before he could get a flight home.

Hey, I know. I am pretty sure that I mentioned that I got the call that my father had died while I was working in a little downscale supermarket in Old Trees, Missouri (before I lived there, although technically, I think the store was in Marlborough, the little speed trap down the road). My brother called to let me know my father had passed, and I told him I’d be up in the morning (it was evening, and I was scheduled to work until 9pm). So I went back to facing the dairy case, pulling the products forward so the case looked full.

But my sainted mother also called the store and told the subbing evening manager that my father had died. She, in turn, told Joanne, whom I’d put off when I’d started the job but who, along with her niece Earlene, the normal evening manager, came to appreciate me for my hustle. And Joanne came to the dairy case, wrapped me in a hug, and said, “Brian, why don’t you go home?” So I did, probably sacrificing almost six dollars in wages, but leaving a faced dairy case in my grief.

So I’m right up there with William Shatner and Brett Favre, who had an incredible game right after his father died. I only hope my boys will continue the tradition and dedicate a video game win in my honor.

At any rate, a good read, a book that offers many insights into making a television program in the 1960s, and worth a read, doubly so if you’re a Star Trek fan.