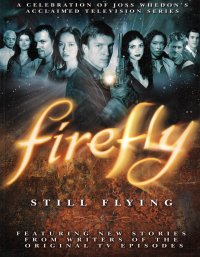 I bought this book, along with Firefly: The Official Companion Volume One and Firefly: The Official Companion Volume Two at my last trip to Calvin’s Books in Branson in June of last year. I also got the Serenity: The Official Visual Companion, and that would probably have been the next published–this book came out in 2010, seven or eight years after the television show and five years after the movie. I picked it up now because the 2022 Winter Reading Challenge has a category Short Stories, and the cover of this book says Featuring New Stories From Writers Of The Original TV Episodes.

Sounds like a book of short stories, ainna? Oh, but no.

The 158 page book has four “stories,” but one of them is a pair of single-panel cartoons looking like they were from a brutal children’s book featuring Jayne. The other stories don’t really break any new ground. One, “What Holds Us Down”, is the most akin to an episode–Kaylee and Wash break into a floating junkyard to steal some parts needed for the Serenity but it goes sideways, and Kaylee has to quickly fix up another ship to escape before the searchers find them amid the rubble. Another story, “Crystal”, is about River visiting the people on the ship before the motion picture takes place and telling them a little about their fates in her inscrutible way. The last short story, “Take the Sky”, deals with an old retired Mal receiving a package from Zoe, the current pilot/owner of Serenity, and reflecting upon his aging and their adventures. So the stories are not exactly what I would have expected, and they’re but brief interludes in the book.

The reminder of it is celebrity/fan material. Each of the stars of the program gets a section with photos and quotes from various sources–nothing new, and we get to hear from the shows costumers, designers, and stunt coordinators. It has a little feature on what happened to the Jaynestown statue–Adam Baldwin kept the head, but the rest likely got discarded–and on the endurance of Browncoat fandom, which might be a little different ten more years on–are they still doing those? A quick Internet search says no, but I see some speculation that Disney might throw something together for Disney+ with a new cast. Kind of like the new (but now as old as the original series was to its time) Battlestar Galactica that ran longer than the one-season television show it rebooted and updated. It will be interesting to see the old Firefly fans acting like I did when the new Battlestar Galactica came around.

At any rate, given that the book only has, what, a dozen pages of short stories, I cannot in good conscience slot it into the Winter 2022 Reading Challenge–I will probably pick up one of James Blish’s Star Trek books for that. And I will likely pick up the Serenity: The Visual Companion book later this year just to make a clean sweep of the Firefly titles. As I have mentioned, I think the film really lost a bit of the playful spirit of the series–this won’t probably come across as much in the script as in the execution. Which is why I have been avoiding it.

Oh, and should you come across a fan suffering from what Disney does to the property, be sure to point out that more people see Nathan Fillion and think Richard Castle than Mal Reynolds. Or even Johnny Donnelly from Two Guys and a Girl. Remind me to drop into conversation cryptically that Fillion played John Donnelly.

So it’s a good bit of trivia and nostalgia, but not something to stand the test of time. More like a flat spine fan magazine than anything else.