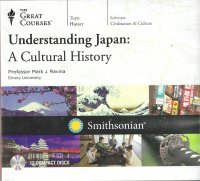 I borrowed this course from the library because I’ve only a passing knowledge of Japanese history from thin books like Samurai Warriors, although I have read original sources like Hagakure: The Book of the Samurai and The Book of Five Rings (and I learned the definition of Keiretsu from The Ninja as some of that novel’s back story is set in post World War II Japan). So I was excited to find this course at the library.

It’s a cultural history, so we get a bit of linear talk about the different eras in Japan’s past, but most of the lectures center around a topic and delve into its relevance in history.

The tone is respectful, but not slavishly praising of the current regime (as one suspects modern Chinese histories are). The professor only lets slip some politics in a couple of places (calling a Japanese attempted assassin right-wing, saying that the way to improve declined fertility rates is government programs that did not exist when the fertility rate was higher, and so on).

The book also provided some additional context for the aforementioned Hagakure and The Book of Five Rings–although both purportedly represent the height of Bushido, the way of the warrior, they were both written after the wars in which the samurai fought, and Hogokare was not actually a military man–he was a scribe. Both of these books were written looking back at an earlier time, with a bit of nostalgia was well as disdain for the way things were when the books were written–that is, a peaceful period bordering on decadence.

So a good summary, overview course for someone just getting into Japanese history. As I’ve learned from listening to an audio course and reading a couple books on Chinese history, particulars will fade unless you continue studies with it, but highlights and perhaps some interesting stories will remain. As with the Chinese audio course, the names will fade a bit as I’ve heard them but have not seen them in print–so I might actually not recognizes them if I see them in print.