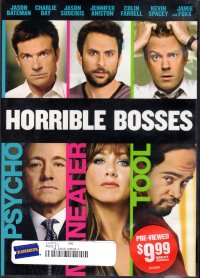 It’s funny; this film came a year after Grown Ups, but it has a more modern, and not in a good way, sensibility. Maybe it’s the difference between an R rated comedy and a PG-13 comedy (which Grown Ups is). This film relies more on drug and sex comedy than the Sandler film. Wait, did I say, “It’s funny?” Maybe I should rephrase that.

Of course, the premise itself limits the grown-up, so to speak, potential. Three friends are having trouble at work, specifically with their bosses. One, Jason Sudekis, has a good job and is well liked by the owner–who dies, and whose good-for-nothing son (Colin Ferrell) takes over and makes our “hero”‘s life miserable. The second (Jason Bateman) is a salesman at some kind of, I dunno, high tech boiler room, his boss is played by Kevin Spacey, and this time Kevin Spacey gets to be the Alec Baldwin character from Glengarry Glen Ross instead of the Kevin Spacey character. The third, played by Charlie Day, is a dental hygenist whose DDS boss, Jennifer Anniston (I did not recognize her) who is sexually harrassing him at work. They decide over drinks that since they cannot kill their own bosses, they should kill each others’ bosses. They engage a black man (Jamie Foxx) they meet in a seedy bar, but instead of being a hit man, he offers to be their murder consultant, who gives them basic, obvious advice. So they start to stalk their respective prey and hijinks, mostly drug and sex hijinks. In the end, they don’t end up having to kill anyone and live happily ever after, at least until the inevitable sequel in 2014.

So, yeah, a modern film. Not as crass as, say, Hot Tub Time Machine 2 or Ted, but still not something I’m necessarily going to watch over and over. However, my boys will have that option when they inherit it and a dozen DVD players. And, gentle reader, I give you that option via the link below, which is a little more expensive than the buck or two I paid for it, but not that much, actually. Get ’em while they last.