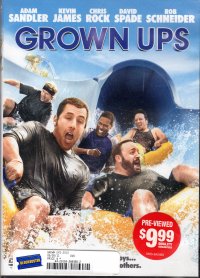 I watched this film with my boys–they were interested in it because it stars Adam Sandler, Chris Rock, Kevin James, and other comic figures they know. But I warned them that this was a more adult-oriented film, and that Sandler plays an adult in it, not the zany man-boy of films like The Waterboy, Little Nicky, or Happy Gilmore.

A junior high school basketball team wins the only championship in the school’s history; thirty-some years later, the coach of the team dies, and the team members assemble for his funeral. They include a successful agent (Sandler) whose wife is an international fashion designer and whose kids are spoiled brats; a househusband (Chris Rock) whose mother-in-law lives with he and his wife (Maya Rudolph); a hippie sort married to a woman several years his senior (Rob Schneider); David Spade playing David Spade (but not Joe Dirt); and a recently unemployed furniture store employee (James) whose wife (Maria Bello) still breastfeeds their four-year-old. They come together and spend the weekend in a lakehouse to reconnect with each other and with their families. The film climaxes with a rematch basketball game with the other team from that championship led by Colin Quinn.

I had seen this film before as a rental before my local video chain closed, so I liked it well enough to pick it up cheaply. Some of the humor is a little crass, but it’s the kind of crass that you get when you’re around friends. Believe it or not, gentle reader, even *I* can be a little crass around my friends from way back. So it fits into the movie instead of defining the movie. And it’s a movie with a lot of heart, with a message that resonates with someone who’s in the middle of that middle age, with a family and responsibilities and wondering what happened to being young–and how to get in touch with the joy of life a little bit.

So, like many films in the Sandlerverse, I’ll probably watch this one again at some point, and I’ll keep my eye out for a cheap copy of the sequel. Unfortunately, though, I might not ever see a new Sandler movie since they’re all streaming only these days. I have to wonder if 2020 kind of marks the start of what might be a dark age–I mean, if someone looks back from somewhere down the timeline, all cultural artifacts from about now are going to be gone because they were only on computers, and nobody even has a freaking floppy drive or CD ROM any more except me.