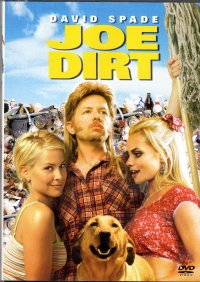 Although I had seen snippets of this film on television a couple of times, I had not seen the film all the way through until I recently watched it with my boys. I picked it up on Saturday at the St. Elizabeth Ann Seton church sale along with 18 other DVDs for a dollar each, and I watched it the same night with my boys. I preface all of these comedies by saying, “This is a documentary” or “This is based on a true story,” but they are coming to view that pronouncement with suspicion.

Joe Dirt (David Spade) tells his story, partially in flashback, as he is interviewed on a radio program where the talker (Dennis Miller) belittles him. His family abandoned him at the Grand Canyon when he was eight, and Joe roamed until he found, what, a foster home? in Silvertown in the Pacific Northwest–where he befriended an attactive girl, Brandy. But Joe decided he had to go find his family, so he starts a search that takes him to the Grand Canyon, to New Orleans, to Baton Rouge, where he meets and exposes a mob boss in the witness protection program and gets kidnapped by Buffalo Bill (of The Silence of the Lambs). He eventually becomes a sensation due to his story on the air, and that helps him find his real parents, and they’re not what he hoped.

The boys enjoyed it, and I didn’t think it was a waste of time. I’m not generally a fan of David Spade. But this is not part of the Spadeverse–this is the Sandlerverse. It’s a Happy Gilmore production and has Kevin Nealon and Blake Clark playing essentially the same thing as he did in The Waterboy (a Cajun people have trouble understanding), so definitely Sandlerverse. The older boy recognized Joe Don Baker and asked what he else he was in; the boy might have recognized him from one of Timothy Dalton’s James Bond movies or two of Pierce Brosnan’s James Bond films. Or he might have been thinking of the chief in Fletch which we watched this spring. He also had a small part in Reality Bites.

So not a complete waste of ninety minutes, and something that speaks to teenaged boys more than their agèd fàthers.