I drive through this coming interchange every time I go into Republic: MoDOT announces new roundabout near Wilson’s Creek National Battlefield:

MoDOT has plans for a new roundabout near Republic, which as drivers talking.

“You are essentially entering into a guessing game,” said local Param Reddy.

That roundabout will be installed at the intersection of route ZZ and Farm road 182, right by the Wilson’s Creek National Battlefield.

MoDOT officials said it would cost around $1.3 million and start construction in Spring of 2023.

As you might know, gentle reader, I oppose roundabouts for a couple of reasons, and this one will illustrate why very well. 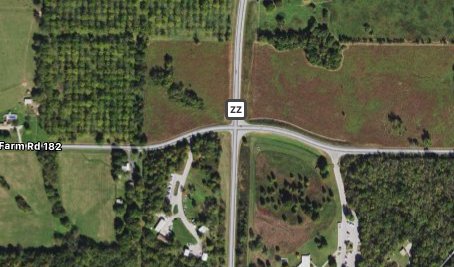 This is the intersection in question. ZZ runs north and south and is a pretty straight state highway with good visibility in both directions. Farm Road 182 is hilly and curvy. The intersection itself is within the bounds of the Wilson’s Creek National Battlefield, so the speed limit on 182 drops to 20, but this is rarely observed. Farm Road 182 has stop signs, but ZZ has no control device.

I have come to this interchange a couple of times where I’ve had to wait behind cars at the stop sign for a couple of minutes, but rarely more.

The area is developing, so perhaps a control other than the stop sign would be in order eventually, but not a roundabout.

I continue to believe that traffic engineers hate people who drive cars, and I’m starting to think that they’re all from the city and ride ebikes to work. Someone from the country who needs to go ten or twenty miles or more when driving doesn’t need a bunch of European traffic fads. We need consistent speeds to get from one point to another.

But I did not go to expensive Traffic Engineering School, which seems to lead to this thought process:

If it saves just one life, it’s worth it! Although I’m not sure that in the ten years that I’ve lived at Nogglestead that one life has been lost at that intersection. Maybe, but it’s not Blood Alley by any means to warrant this imposition.