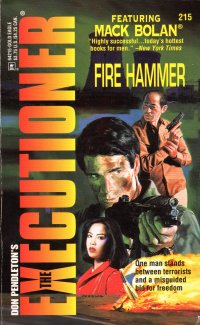 You know, I have kind of enjoyed the last couple of Executioner novels (all right, mostly Rescue Run and Death Whisper), but this book is a real clunker.

To start with, the plot involves helping China. A group of Chinese rebels working with a Chinese American entrepreneur hope to bring China’s Communist government down by causing an accident at a nuclear plant in southeast China, which will also poison Hong Kong. Bolan has to track them through a couple of set pieces to Malaysia, where he works with a Chinese-American CIA agent and eventually the only remnant of a Chinese “secret service” team that tried to kill Bolan on a couple of occasions. They have to attack an enemy stronghold with a maze-like structure that can serve as a training room for various nuclear plants, which means of course we’ll have a shoot out in a maze.

Yeah, well. You know, when I read Lee Child’s Killing Floor, I mentioned that he (Child) was an Englishman trying to write in the American, and the author of this particular paperback leads me to believe he, too, might be English. But some of the same kinds of things: Calling cartridges ‘shells’ (I think) and especially the mistake in measuring distances. The mistake is this: Americans tend to measure things in terms of feet until they start getting pretty large, at which time we talk about yards. So talking about three yards is ludicrous unless you’re talking about an American football game. At one point, it goes on about how Bolan prepares himself to jump two yards and then barely caught the edge of the precipice/building as though that was a great distance–but if Mack Bolan fell that two yards, he would hit his head on the edge.

I was working myself up to a thesis that this was Lee Child in another early pseudonym, but apparently the author is a guy who lists his Gold Eagle work in his LinkedIn bio. Welp, I guess I am not as clever as I think.

Aside from the British-sounding bits, the book has some clunkers, some misplaced verbiage that could have been cut, as well as some mistakes as to which gun Bolan is holding at any given time (he fires the Beretta, then he fires the Desert Eagle, without mentioning that he’s changed weapons). Maybe that’s not a mistake, as he later goes two-handed, firing one of the pistols in one hand and a Chinese assault rifle in the other. With deadly accuracy.

So I was glad to be done with the book; apparently, it’s early in this author’s work. Hopefully, he got better.

But now that I’m down to four books in The Executioner series on my to-read shelves, suddenly I look upon them with trepidation. I was hoping to finish the series soon and feel some sense of culmination or something for having read almost 100 of them over the last decade. But it will probably be later in the year or early next that I finish the series as I’m going to look for something else for the nonce. Pamela? you say. Let’s not go to extremes, gente reader.